The Pakistan Peopleâ€™s Party Central leader Sharjeel Memon blamed the Pakistan Muslim League-Nawaz (PML-N) of backing the terrorists who were responsible for the recent Quetta blast.
Talking to Express News, he said â€œin the past we saw the PML-N allying with banned religious organizations and give statements like, â€˜donâ€™t attack Punjab we understand your ideologyâ€™,â€ Memon accused. He was emphasizing on the links that PML-N allegedly had with extremist groups in the past.
He further alleged that the Punjab Law Minister Rana Sanuallah was harbouring and nurturing terrorists in Punjab, including those belonging to the Lashkar-e-Jhangvi which claimed responsibility for the recent bombing in Quetta that killed 89 people, mostly Hazara Shias.
While the focal point of Memonâ€™s conversation was to criticize PML-N of backing banned organizations, he did speak about the blast on shrine of Ghazi Ghulam Shah Mari in Shikarpur where two persons were killed and twelve others wounded.
Talking about the attack on the shrine of Ghazi Ghulam Shah Mari in Shikarpur, Memon said that the provincial government was trying to protect citizens of interior Sindh, but terrorists were resorting to remote controlled bombs which were difficult to detect and diffuse.
Reverting back to his original stance, Memon said that PML-N had to stop backing the terrorist and their infrastructure, as only then the law and order situation will calm down.
â€œWe have arrested a few members from banned organizations. One of them has accepted that till date he has murdered 100 people and will continue to do so,â€ Memon added.
In the same news bulletin, Senator Pervaiz Rasheed said, â€œShahbaz Sharif has never pardoned any suspect and that it was the Punjab government who arrested the people involved in the Quetta blasts. â€œWhen will Sharjeel Memon come and take them,â€ he questioned on Express News.
He also asked Memon that when would the government question those who were aiding criminal suspects in fleeing the country. 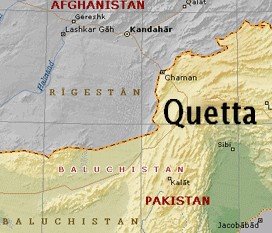