The 15th martyrdom anniversary of the great leader of Millat-e-Jaffria, Shaheed Dr. Mohammad Ali Naqvi was held in Pakistan. Dr. Mohammad Ali Naqvi, the founder of several leading shia organizations in Pakistan, was martyred by the American agents terrorist of outlawed terrorists organization at Lahore on 7th March 1995. According to the Shiite news correspondent, The Central program to commemorate the services of Dr. Mohammad Ali Naqvi was held at his grave situated at Thokar Niaz Baig, suburbs of Lahore. The important thing in this program was that the presence of former Head of Iranian Baseej force and teacher of Qom Seminary Iran, Agha Ali Raza Panhiyan. In his speech Agha Ali Raza Panhiyan said that martyrdom is given to whom, who wants martyrdom. He said that in eight years war between Iran and Iraq we observed that those solders that made their will and were sure of martyrdom got the martyrdom during the holy war adding that this was indicated that martyrdom is given by the Allah to those who want themselves to be sacrificed in the path of almighty Allah. Agha Panhiyan further said that Shaheed Dr. Mohammal Ali naqvi surely was the true soldier of last Shiite Imam, Imam-e-Zamana (ajtf) therefore he got the medal of martyrdom from Allah. He pay condolence to the family of Shaheed Dr. Mohammad Ali Naqvi and prayed for rest of the departed soul of late Dr Mohammad Ali Naqvi. ISO Central President Adil Bangash, Leading religious scholars, clerics, and ISO former President addressed the public meeting and highlighted the sacrifices and role of Dr Mohammad Ali Naqvi for the supremacy of Islam-e-Nab (the real Islam). Large Numbers of Ulemaâ€™s. ISO formers, activists of ISO from across the country and thousands of were present. Earlier, Imamia Scouts had a parade on his tomb to salute his untiring efforts and work for the Shiite stabilization in Pakistan. 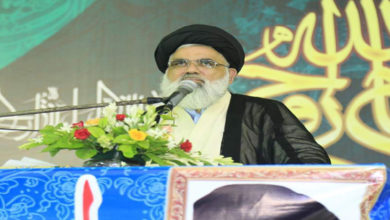 US and Saudi Arabia use Coronavirus for political gains, Allama Javad says