A special unit of the police announced on Friday the arrest of a man who allegedly bankrolled the militants who carried out the grisly Safoora Goth bus attack.

Counter-Terrorism Department (CTD) officials said that Adil Masood Butt has been taken into 90-days preventive detention, under Protection of Pakistan Act 2014, by the CTD for questioning.

Butt’s house in Phase V of the Defence Housing Authority (DHA) was raided on December 2 over his suspected involvement in financing the Safoora attack.

Gunmen shot dead 45 members of the Ismaili community during an execution style attack on their bus in Safoora Goth in May this year.

Cautioning that their investigations were still in the preliminary stage, CTD Investigation Officer Muhammad Zafar disclosed that Butt was a highly educated man, having graduated (BSc) in management from Indiana University in the US before completing an MBA from Fordham University. Further, he is a member of the board of governors of the College of Accounting and Management Sciences (CAMS) in Karachi, holding around 50 per cent of shares of the institution.

Further, he is a partner in the restaurant owned by the chief suspect in the Safoora bus attack – Saad Aziz.

A second CTD official, speaking on the condition of anonymity, confirmed Butt’s arrest. Noting that their investigations into his possible involvement in the attack were still under way, they had yet to find any direct evidence of his role.

“A joint interrogation team (JIT) will be formed for him if anything is proved against him, otherwise he could be released and his name placed in the fourth schedule.”

Officials said that interrogations of Aziz and his comrades had yielded names of four suspects for financing the attack while Butt’s name came up during their questioning.

Shiite News Exclusive: Charter of Demands of Heirs of Martyrs of Shikarpur Tragedy 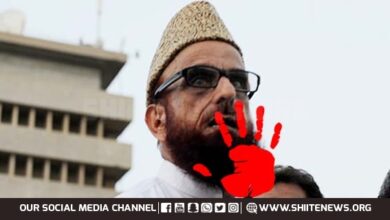