While condemning the governmentâ€™s inability to provide security to the vulnerable Shia community, Allama Talib Jauhari on Tuesday said demanding rights is not unlawful, not giving them is. Jauhari was addressing a joint press conference at Karachi Press Club held to express solidarity with the Hazara community which came under attack again on February 16. A bomb attack in a Shia neighbourhood in Quetta left over 80 people dead.

Calling the current government â€œa sinister democracy,â€ Jauhari said a democratic state is desirable but the one we have now is not in the favour of the people it claims to represent.

He called on non-governmental organisations to help those affected in the Quetta carnage.

Holding the government responsible for the current mess, Jauhari said the leaders should either accept they are incompetent and resign or solve issues.

Security alert in Pakistan on Tasu’a and Ashura 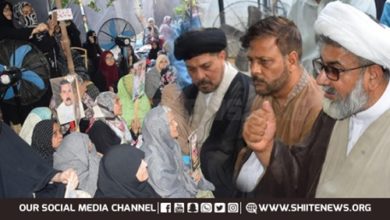