The reported death of al Qaeda-linked top Lashkar-e-Jhangviâ€™s (LeJ) chief Qari Zafar in a US drone strike in Miramshah on February 24 has given a lethal blow to both the LeJ, which is involved in sectarian killings in Pakistan.

According to the Shiite News monitoring cell, Qari Zafar, top terrorist of notorious Laskar-e-Jhangvi and an important leader of anti-state Taliban terrorists, was

Â reported to be among the people killed in Wednesdayâ€™s drone attack in the Dandi Darpakhel area of North Waziristan.

Qari Zafar, who was hailing from Karachi and belonged to outlawed Lashkar-i-Jhangvi terrorists group was involved in the killings of hundreds of shia Muslims in Karachi.

Terrorist Qari Zafar had joined the Tehreek-e-Taliban Pakistan (TTP) in North Waziristan some time before the Pakistan army launched an operation in South Waziristan against the terrorists. He was seen in a video, sitting next to TTP chief Hakeemullah Mehsud and his deputy Waliur Rehman.

Sindh Police has listed the Qari Zafar in the list of most wanted terrorists and allocated the 5 Lac Rupees head-money of Qari Zafar, a former prayer leader of Bilal Mosque Model colony, Sindh police website claimed.

The US has announced a reward of $5 million for information leading to the capture or death of Qari Zafar due to his involvement in attacks on former president Pervez Musharraf, the American consulate and other terrorist attacks but ran away from the custody of Punjabâ€™s Special Investigation Unit in October 2007. Intelligence sources told Daily Times that Qari Zafar was the mastermind of attacks on a Special Investigation Unit (SIU) office in Model Town Lahore, Marriot Hotel, FIA building and American consulate in Karachi.

The Taliban confirmed that a terrorist leader who was behind multiple terror attacks in Pakistan and was wanted by the US for murdering a consular official in Karachi was killed in an airstrike in North Waziristan last week.

According to the intelligence findings, three major incidents of suicide bombings in Karachi in 2006 â€“ the suicide blast outside the US Consulate [on March 3, the Nishtar Park massacre [on April 11 which eliminated the entire leadership of the Sunni Tehrik and the July 14 death of Shia leader Allama Hasan Turabi in a suicide bombing outside his residence â€“ were all carried out by the LeJ and were planned in the South Waziristan tribal agency by none other than Qari Zafar, who is the acting Chief of the LeJ, ever since the arrest of its ameer Muhammad Ajmal alias Akram Lahori, who is now languishing in the Karachi Central Prison.

ISO Murdabad America rally on 15th May in Karachi and Lahore 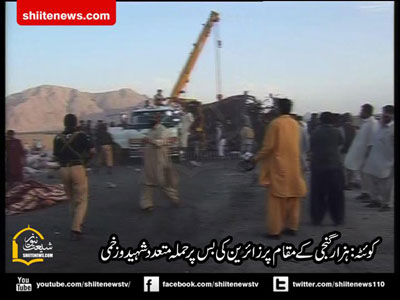 More than 1000 Shia pilgrims denied permission to travel in Punjab