The failure of law enforcement agencies in curbing terrorism along with intelligence reports warning about the terror threat during holy month of Rabiul Awal, the city is once again vulnerable to terrorist attacks. Sources privy to the matter said more than 35 processions would be taken out on the occasion from different areas of Karachi on Rabiul Awal 8th and 12th. Police high-ups have directed all concerned DIGs, TPOs, and SHOs to make foolproof security arrangements for the processions and rallies. Additionally, Sindh Home Minister Dr Zulfiqar Mirza has also directed law enforcement and intelligence agencies to take extra security measures. However, in view of the previous incidents during holy months of Muharram and Safar, it seems that the law enforcement agencies have been unable to chalk out a counter terrorism strategy to curb attacks during religious days so far. It is pertinent to mention here that police had claimed to have busted the terrorists involved in the three blasts on Muharram, 8, 9 and 10 respectively, but regardless of these tall claims, terrorists again struck the city twice on Arbaeen (Chehlum) Imam Hussain (AS) that left 34 people martyred. According to the Shiite NewsÂ Correspondent, Now the city is once again open to threat especially on Rabiul Awwal 8th, when the Shiaâ€™s take out the â€˜Chup Tazia and Imam Hassan (AS) martyrdom processionâ€™; and Rabiul Awwal 12, when the Barelvis take out a procession to celebrate Eid-e-Miladun Nabi(SAWW). Police source said it would be difficult for law enforcement agencies to check and provide security to all minor processions. It was also learnt that terrorists could use a new modus operandi like magnetic devices. However, despite the threats of terrorism both Shiaâ€™s and Sunniâ€™s of the metropolis have vowed that they would not afraid from the threats of Terrorism. They said that the Takfiriâ€™s (Wahabis) wants to stop the holy processions to commemorate the birth of Holy Prophet Mohammad (SAWW) and the martyrdom processions and congregations of AhlulBayet (AS) (progeny of Prophet Mohammad) for their evil desire but they would not succeed in their evil desires against the Islam. 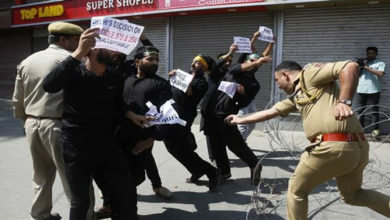