An activist of the banned Deobandi takfiri terrorist outfit Tehreek-e-Taliban Haqqani network, also on trial for target killings was remanded to the prison for 14 days. He assassinated Shia auto parts dealer in Karachi on the order of Deobandi terrorist commander.

Hashim Qadri, involved in targeted murder of Mehboob Rehmani, a Shia auto parts dealer and others, was presented before Judicial Magistrate (East) Abdul Razzaqi. The IO informed the court that Qadri had carried out sectarian killings on the Ameer’s orders. He was arrested by officials of the Ferozabad police and had a number of cases registered against him. The IO was also asked to submit a charge-sheet of the cases the accused was facing, by the next hearing.

In another case a man accused of carrying out target killings was produced before a judicial magistrate to record his confession under section 164 of the Cr. Pc. The accused, Rehan, brought to court by Rangers amid heavy security was produced by an SHO of the anti-terrorism cell in front of Judicial Magistrate (West) Kaneez Fatima. He was already on physical remand till March 18. The magistrate after hearing the case reserved the order on the plea. 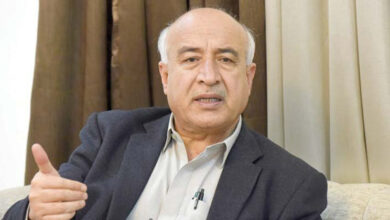 Allama Sibtain says alliance with other parties based on commonalities