While carrying banners and placards, they questioned the judiciary, executive and legislature of Pakistan.

Furthermore, they asked nature of crime of victims of enforced disappearance where even the judiciary of Pakistan has no power for trial!?

Meanwhile, families of the victims continue to protest at the sit-in camp under the aegis of Joint Action Committee for Shia Missing Persons.

They are sitting outside mausoleum of founder of Pakistan Mohammad Ali Jinnah.

Meanwhile, families of the victims are protesting against enforced disappearance of their bread earners in Karachi.

They are sitting outside mausoleum of founder of Pakistan Mohammad Ali Jinnah to register protest.

Unfortunately, none from the security establishment has come forward to ensure end to end enforced disappearance of loyal sons of Pakistan.

Instead, a state security agency has subjected another notable to enforced disappearance in Sahiwal Sargodha.

The media covered wailing mothers, sisters and wives and minor children of many victims of enforced disappearance.

Protesting families slammed the perpetrators of enforced disappearance and accused them of committing their collective economic genocide.

Moreover, they said that on the one hand, enforced disappearance amounts to economic genocide and on the other it amounts to collective character assassination.

They lamented the unethical, immoral, unlawful and unconstitutional, biased and discriminatory policy of power that be against Shia Muslims.

Tashfeen Malik and her Husband were inclined towards extremism before their marriage: Investigation Report 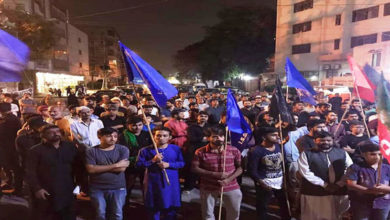