Allama Syed Shafqat Hussain Shirazi, deputy secretary general, Majlis-e-Wahdat-e-Muslimeen, has said that violation of chador and char divari was a proof that Nawaz-led PMLN government turned into a dictatorship.

“Disrespecting the women in hijab inside their houses in unjustifiable raids, filling jails with peaceful innocent political opponents, implicating them in false cases and inaction against the rulers nominated in the massacre of innocent opponents, all these indicate Pakistan has come under dictatorship,” he said in his reaction to PMLN’s federal and Punjab government’s crackdown on MWM and allied parties’ cadres.

He said that on the one hand rulers have blocked roads to prevent the supporters from joining sit-in near Parliament and on the other they were trying to hoodwink people by making them believe that sitters lack mass support. He said that as a matter of fact, government had encircled the sit-ins through containers around the roads leading to the sit-ins.

“No democracy launches witch-hunt against the peaceful law-abiding political opponents, nor harass and impound them in lock-ups and jails. Dictators of Pakistan don’t know democratic norms and values,” he said.

Allama Shirazi demanded that all detained supporters of the MWM and allied parties should be released forthwith. He urged the rulers to listen to the most popular slogan of the masses: Go Nawaz Go. He asked them to quit so that fair inquiry into the massacre of Model Town could be initiated. 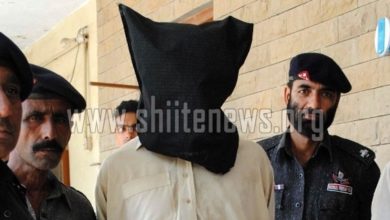 American Islam implemented in Pakistan rather than the Muhammadi Islam for which the country was created: Ali Mehdi