French President Emmanuel Macron said Wednesday that France would follow the United States in withdrawing forces from Syria after ISIL terrorists are defeated.

Speaking to students of the George Washington University in the US capital, Macron stressed that his country’s “first focus” was the war against the ISIL terror group.

“Your president [Donald Trump] said he would stop the involvement of US troops as soon as the war against ISIS is completed. We’re in the same position… Our willingness is to be totally committed in this war against ISIS, no more than that,” he vowed.

But he went on to say that France needed to “fix” the situation on the ground to help the Syrians build an inclusive society and prevent other terrorist groups from thriving on frustrations of the people.

Macron also said France became part of the US-led coalition operating in Syria because the French were targeted by ISIL terrorists on their own soil. He said the 2015 attacks in Paris, which killed 130 people, were organized from the Syrian city of Raqqa. 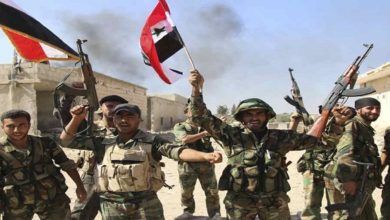