Some militants may soon agree to withdraw from the Damascus suburb of Eastern Ghouta as Syrian government troops constantly shrink the militant-held areas of the flashpoint region.

Ali Haidar, the Syrian minister for national reconciliation affairs, said in an interview on Monday that militants in an enclave centered around the town of Harasta may be ready for such a deal.

“What remains of Ghouta is, I believe, open to discussion … to accomplish reconciliations at a certain level.”

“There may be an accomplishment in Harasta in the coming period. I don’t commit to specific timeframes because the matter is linked to the militants accepting departure or settling their situation (with the authorities) and the army entering the area,” Haidar noted.

Harasta is one of three rebel pockets in Eastern Ghouta, a besieged area on the outskirts of Damascus which is home to some 400,000 people.

Elsewhere in his remarks, Haidar pointed out that there were contacts with Ghouta militants and “to a certain extent there are acceptable results in part of the file.”

The Damascus government is offering militants in Eastern Ghouta similar terms to those offered in other parts of the country that have been recaptured from militants, namely safe passage out for those who agree to surrender territory, or a reconciliation agreement for those who wish to stay under government rule.

Damascus has liberated numerous areas across the country on the back of similar agreements.

The development came after thousands of civilians left Eastern Ghouta as militants have been raining rockets on the capital from the suburb area, while using civilians there as human shields, preventing their exit through safe passages set up by Russia and blocking their access to humanitarian aid.

The evacuees were reportedly provided with basic commodities upon arrival at Syrian army posts before being transported to temporary accommodation centers.

During the past few weeks, Syria and Russia have cornered foreign-backed militants in the enclave as part of their campaign to liberate civilians holed up there and end militant attacks from the suburb on the capital.

During their advances in the area, Syrian forces have uncovered workshops used to make chemical weapons. The Syrian military has also intercepted several arms and ammunition cargoes heading to Eastern Ghouta.

Haidar said the Syrian army had captured 80 percent of Eastern Ghouta, which was controlled by militants since mid-2013.

The Syrian army has made the gains after splitting the area into sections to facilitate the battle against various militant groups there, particularly the so-called Jaish al-Islam outfit and the Jabhat Fateh al-Sham Takfiri terrorist group, formerly known as al-Nusra Front.

ISIL blows up Arch of Triumph in Syria’s Palmyra 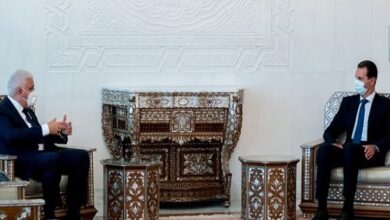