According to Turkey’s state-run Anadolu news agency on Monday, the villages of Shankal, Qorne, Bali and Adah Manli were captured in the Afrin region along with several other rural regions.

The so-called Syrian Observatory for Human Rights reported that heavy fighting is underway between Turkish and Kurdish forces in two of the villages.

Meanwhile, one Turkish soldier was killed during the third day of clashes with Kurdish forces.

“One of our heroic soldiers was martyred during clashes” with Kurdish militants from the People’s Protection Units (YPG) militia southeast of the Turkish border town of Gulbaba in Kilis, said a statement released by the Turkish military.

Turkey launched the so-called Operation Olive Branch on Saturday in a bid to eliminate the US-backed YPG, which Ankara views as a terror organization and the Syrian branch of the outlawed Kurdish Workers’ Party (PKK). The latter has been fighting for an autonomous region inside Turkey since 1984.

The operation was launched days after Washington said it would work with the Kurdish militants to set up a 30,000-strong border force near Turkish soil, a move that infuriated Ankara.

The YPG is operating under the larger US-backed Syrian Democratic Forces (SDF) militants without authorization from Damascus, which calls the force “traitors” to the Syrian nation. 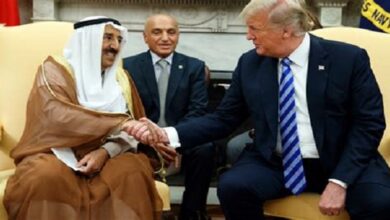 Trump: Kuwait May Be Next in Middle East to Normalize Ties with ‘Israel’

How Tel Aviv Has “Heavy Hand” in Syrian Crisis?