Turkey says the military operation it plans to launch against US-backed Kurdish militants in the northwestern Syrian city of Afrin could expand to the nearby city of Manbij.

“Turkey’s precautions against YPG/PKK cannot be limited to only Afrin. There is also Manbij and east of the Euphrates River,” Turkish Foreign Minister Mevlut Cavusoglu said in Canada’s Vancouver on Tuesday.

He was referring to the Kurdish People’s Protection Units (YPG), which Ankara views as a terror organization and the Syrian branch of the outlawed Kurdish Workers Party (PKK).

On Sunday, President Recep Tayyip Erdogan announced that Turkey will launch an attack on Afrin, which is controlled by the YPG, “in the coming days” in a bid to “purge terror” from his country’s southern border.

The announcement came after the US said it will work, along with a coalition of its allies purportedly fighting the Daesh terrorist group, with US-backed militants of the the YPG-led Syrian Democratic Forces (SDF) to set up a new 30,000-strong “border security” force.

The force would operate along the Turkish border with Iraq and within Syria along the Euphrates River.

Elsewhere in his comments, Cavusoglu warned that the US initiative to set up a militant force near Syria’s border with Turkey “irreversibly harms” ties between the two NATO allies, which have already been tense over a range of issues, including Washington’s support for the Kurdish militants operating at Turkey’s doorstep.

“The US has previously stated that the PYD/PKK was not their strategic partner, [that] in fact, they were only working together to defeat Daesh,” he noted, calling on Washington to fulfill its promise and take back the weapons it has provided to the militants.

Additionally on Tuesday, Erdogan called on the North Atlantic Treaty Organization (NATO) to take a stance against the US over its Syria border force plan.

“Hey NATO! You are obliged to make a stance against those who harass and violate the borders of your members,” he said while addressing his ruling party’s deputies in Ankara.

Turkey has already dispatched a convoy of over 40 military vehicles and tanks to the country’s southern regions along the Syrian frontier.

The border force plan was announced amid ongoing peace talks between Syria’s warning sides within the Astana format with the mediation of Turkey, Iran and Russia.

It also elicited angry reactions from Syria, Russia and Iran.

Syria described the formation of such a border force as a “blatant assault” on its sovereignty. The Damascus government is also opposed to Turkey’s unilateral military actions on its soil.

US bid ‘harmful’ to political efforts

Meanwhile, the Turkey-based Syrian National Coalition (SNC) opposition group, which is involved in the peace process in the Kazakh capital of Astana, expressed strong reservations about the US border force bid, warning that it would damage the political settlement of the Syria crisis.

“A large, separate Kurdish force might open the door for a new political struggle in the region,” SNC chief negotiator Nasr al-Hariri said.

“Any force based on ethnicity or religion will be harmful to a political solution,” he added. 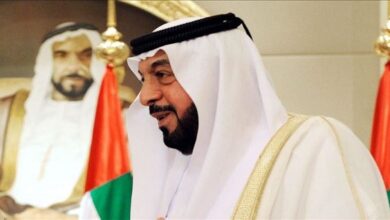 UAE president to arrive Pakistan next week on two-week visit