Turkish President Recep Tayyip Erdogan has traveled to Kuwait after visiting Saudi Arabia as part of a regional tour to help resolve a dispute among several Arab countries in the region.

Erdogan and an accompanying delegation arrived in Kuwait City late on Sunday and were received at the airport by Kuwaiti Emir Sheikh Sabah al-Ahmad al-Sabah.

Turkey’s state Anadolu Agency said Erdogan held a meeting with the Kuwaiti Emir at Dar Salwa Palace, “which lasted an hour.” But it did not disclose the details of the discussion or what the outcome of the meeting had been. Kuwait’s news agency, KUNA, also did not reveal details.

The Turkish president is touring regional countries in an attempt to resolve the dispute between four Arab countries, led by Saudi Arabia, on the one side and Qatar on the other.

Saudi Arabia, the United Arab Emirates (UAE), Bahrain, and Egypt broke off diplomatic ties with Qatar on June 5, accusing Doha of supporting terrorism. They also suspended all land, air, and sea traffic with Qatar. Doha has denied the accusations and has refused to meet a list of demands forwarded to it by the boycotting countries.

Kuwait has been mediating between the disputing parties.

President Erdogan has previously said that his tour should not be taken as an effort at “mediation.” But that only seems to be the purpose, even as he runs little chance of contributing to a resolution.

Ankara is already perceived to be tilted toward one side of the dispute — Qatar — and Erdogan has upset the Saudi-led countries by making strong statements in favor of Doha.

Soon after the diplomatic standoff erupted, Turkey also approved the dispatch of thousands of more troops to a base it maintains in Qatar in an apparent bid to signal to Doha that it would have its back should the dispute escalate into a military one.

The boycotting countries were quietly displeased, and when they later issued the list of demands from Qatar, they included one that asked Doha to close the Turkish military base permanently.

On Sunday, Erdogan was in Saudi Arabia, where he met with Saudi King Salman bin Abdul Aziz and Crown Prince Mohammed bin Salman.

No details were available about the potential outcome of those meetings, either.

Erdogan is due in Qatar on Monday.

Meanwhile, the European Union (EU)’s top diplomat, Federica Mogherini, has traveled to Kuwait to also mediate between the feuding sides.

High Representative Mogherini visited Kuwait on Sunday. She held talks with the Kuwaiti emir and other officials, praising the country’s mediation efforts in the dispute with Qatar.

She also said that the crisis “should be resolved through dialogue and without delay,” according to an account of the trip provided on the website of the EU’s External Service.

Mogherini “called on all the parties to enter into negotiations to agree clear principles and a roadmap for a swift resolution of the crisis.” She said the crisis would be more damaging both to the disputing parties and to the “stability of our common neighborhood” the longer it lasted.

The United States, too, has previously attempted to mediate but has failed to prompt a breakthrough in what the Arab countries themselves say is a dispute unlikely to be resolved any time soon.

In a related development, a Brussels-based human rights group has called for an end to the Saudi-led siege on Qatar.

The Alliance for Freedom and Dignity (AFD) said on Sunday that the blockade was impacting ordinary Qatari citizens.

A 16-member delegation from the AFD has traveled to Qatar to “investigate and document” the impacts of the siege on Qatari citizens, according to Al Jazeera. It has been meeting with those affected by the restrictions to probe the matter. 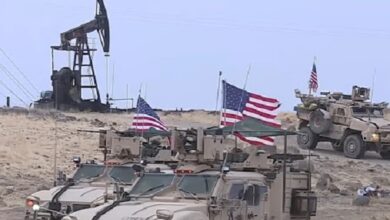 US military tankers smuggle crude oil from Syria to Iraq