Syrian army forces, supported by allied fighters, have reportedly managed to advance on the Daesh-held eastern province of Dayr al-Zawr for the first time since 2014 days after an Iranian missile strike against terrorist positions there.

Backed by pro-government forces, “the Syrian army entered Dayr al-Zawr Province from the southeast, near the Iraqi border,” the so-called Syrian Observatory for Human Rights (SOHR) said on Friday.

SOHR Head Rami Abdel Rahman noted that the Syrian forces had advanced eight kilometers into the province and were just 12 kilometers from the key T2 oil pump.

The Syrian forces now control part of Dayr al-Zawr city and a nearby military airport, but Daesh is in control of most of the provincial capital.

Earlier this month, the Syrian troops reached the eastern border with Iraq and they were reported to be in control of an 85-kilometer stretch of the frontier by Friday.

The missile attack killed more than 170 Takfiri terrorists and inflicted heavy damage on their equipment and systems, the IRGC said in a statement. The strike was conducted in retaliation for the June 7 terror attacks in the Iranian capital, Tehran.

Over the past few weeks, tensions have escalated in Syria between the government forces, the US and Russia.

In two occasions in June and May, US warplanes attacked Syrian military forces near the town of At-Tanf, claiming they posed a threat to US forces, an allegation rejected by Damascus.

Last week, a US Navy F/A-18 Super Hornet shot down a Syrian SU-22, which was conducting an operation against Daesh militants on the outskirts of the city of Raqqah.

The shootdown led Moscow to announce a halt to a hotline with the US meant to minimize incidents in Syrian airspace and vow to track US-led coalition aircraft in central Syria as “targets.” 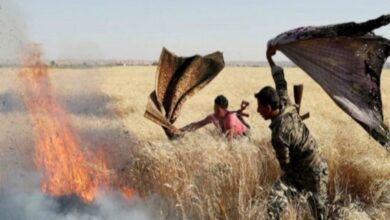