Amid Washington’s ferocious attempts to further plunder natural resources in war-ravaged Syria, the US military has used dozens of tanker trucks to smuggle crude oil from the country’s energy-rich northeastern province of Hasakah to bases in neighboring Iraq, where American forces and trainers are stationed.

The development comes nearly a fortnight after the United States smuggled a batch of stolen Syrian oil into Iraq.

“A convoy of the US occupation forces, consisting of 88 tankers loaded with stolen Syrian oil, left from the illegitimate Mahmoudiya crossing and entered Iraqi territory,” SANA cited local sources from Ya’rubiyah town as saying on September 9.

The sources noted that US forces transferred the convoy to their bases in northern Iraq.

According to data released by the Syrian Ministry of Oil and Mineral Resources, Syria produced a total of 14.5 million barrels of oil in the first half of the current year, and the daily oil production stood at about 80,300 barrels.

American occupation forces and their allied Takfiris plundered 66,000 barrels of crude oil during the mentioned period.

The data further showed that just about 14,200 barrels were available for the Syrian domestic oil refineries.

The US military has stationed forces and equipment in northeastern Syria, with the Pentagon claiming that the deployment is aimed at preventing the oilfields in the area from falling into the hands of Daesh terrorists.

Damascus, however, maintains the deployment is meant to plunder the country’s rich mineral resources.

Former US president Donald Trump admitted on more than one occasion that American forces were in the Arab country for its oil.

Last month, a Chinese foreign ministry spokesman denounced the illegal presence of US military forces in Syria, saying Washington’s continued looting of the war-torn country’s energy and mineral resources has only exacerbated the suffering of the Syrian people.

“It is appalling to see the sheer scale of US plundering in Syria, which has been going on as the country tries to emerge from a crisis that has dragged on for over a decade and a grave humanitarian crisis facing its people,” Zhao Lijian said at a regular press conference in Beijing on August 30. 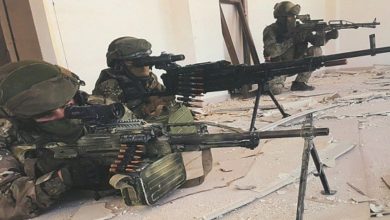