During a meeting in Damascus on Tuesday, the two discussed “military-technical cooperation as part of the joint fight” against international terrorism and Russian humanitarian assistance to the people of Syria “suffering from the prohibitive sanctions of the United States and Western countries,” Russia’s Defense Ministry said in a statement.

Shoigu also “informed the Syrian president about the exercises of the Russian navy in the eastern Mediterranean.”

The Russian military has deployed long-range nuclear-capable bombers and fighter jets carrying state-of-the-art hypersonic missiles to its airbase in Syria for massive naval drills in the region.

Russia’s Defense Ministry said the exercise in the eastern Mediterranean that involves 15 warships and about 30 aircraft is part of a series of naval drills that started last month.

It said the maneuvers were intended to train for action to “protect national interests” and “fend off military threats against the Russian Federation”.

Russian jets have been targeting positions held by terror outfits inside Syria at the Damascus government’s request since September 2015. The airstrikes have helped Syrian forces advance against the militants, who have been wreaking havoc in the Arab country.

Russia and the West are deeply divided over the Syrian crisis since its outbreak in March 2011. While Russia has been supporting Damascus in its fight against militants, the Western states want to see Assad removed from power.

The United States, along with its Western and regional allies, has been among the staunch supporters of the militant groups operating against the Syrian government.

“We are seriously concerned over the current situation in territories that are not controlled by Syrian government authorities, in particular in Idlib, on the eastern bank of the Euphrates and in al-Tanf region, where Americans continue their illegal deployment,” Syromolotov said in an interview with TASS news agency.

“The United States’ recent operation to neutralize the leader of Daesh terrorist group, Abu Ibrahim al-Hashimi al-Qurayshi, in the Idlib de-escalation zone is definitive evidence of the fact where international terrorism originates from.”

Syromolotov pointed to the Daesh assault on Ghwaryan prison in the northeastern Syrian town of Hasakah on January 20, which resulted in the escape of “several hundreds of dangerous terrorists.”

“These facts highlight the need for restoration of the Syrian government’s control over entire territories in the country, and establishment of efficient international cooperation with Damascus in the fight against terrorism,” the Russian diplomat stressed.

On January 26, the US-backed Syrian Democratic Forces said they had retaken full control of Ghwayran prison, ending six days of battles that turned the largest city in northeastern Syria into a war zone.

More than 100 Daesh terrorists launched an attack against the Ghwayran prison on January 20 to free their comrades from the detention center, which was thought to hold some 3,500 Daesh inmates at the time of the assault.

Daesh terrorists entered the prison after their two explosives-laden vehicles steered by bombers destroyed the entrance and killed the guards. Terrorists caused a major jailbreak of an unknown number of their comrades, seized weapons and took over several cell blocks.

The brazen Daesh jailbreak attempt and ensuing clashes, according to the so-called Syrian Observatory for Human Rights, left 124 Daesh terrorists, 50 SDF militants and seven civilians dead. The attack is considered the group’s most high-profile and sophisticated terrorist operation since the loss of its so-called caliphate nearly three years ago.

Syria’s Foreign Minister Faisal Mekdad condemned a bomb attack on a military transport bus in the capital Damascus, which killed an army soldier and wounded 11 others, stating that sponsors of terrorism will eventually suffer the deleterious consequences of their support.

“Such deplorable terrorist acts show the continuation of the Western and American aggression, and their continued support for armed terrorist groups,” Mekdad said in an interview with the pro-government al-Watan newspaper.

He added, “We will continue to firmly back the Syrian Arab Army as it tries to guarantee the security of the Syrian nation, and keep up the fight against international terrorism.”

“We condemn all acts of terror against ordinary Syrians and the country’s infrastructure. We are calling on all those who encourage terrorism to stop their practices because they will have to bear the consequences at last,” the top Syrian diplomat pointed out.

Mekdad stressed that the international situation is at a dangerous stage, mainly due to the fact that Western countries are targeting countries that continue to preserve their sovereignty and independence. 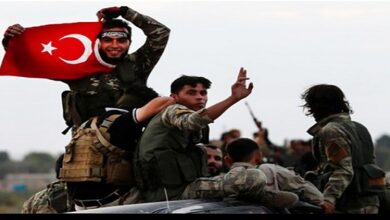 Clashes erupt between 2 terrorists groups affiliated with Turkey in Afrin 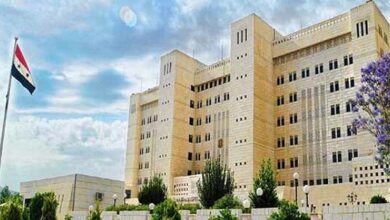 Damascus: Rasict US, not eligible to talk about human rights 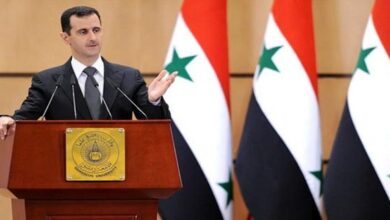