Clashes between Syrian Kurdish forces and ISIS prisoners trying to escape from a prison in Al-Hasakah Province have displaced people in the northeastern Syrian region.

Syrian news sources reported that some remaining ISIS elements attacked al-Sina’a prison in Al-Hasakah in the past two days, and a number of ISIS prisoners escaped, but Syrian Kurdish forces announced that no ISIS prisoner escaped.

However, clashes between Syrian Kurdish forces and ISIS terrorists erupted after ISIS attacked al-Sina’a prison, resulting in many Al-Hasakah residents fleeing the city.

Syrian Kurdish forces have put a curfew on the agenda in Al-Hasakah.

Some Syrian news sources also reported that in the meanwhile, Turkish troops also attacked some areas in Al-Hasakah. 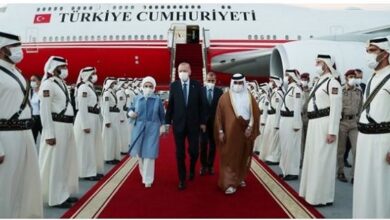 Turkish president arrives in Doha to meet with Qatari officials