While reiterating Qatar’s support for Iran’s nuclear deal, Joint Comprehensive Plan of Action (JCPOA), Sheikh Mohammad bin Abdulrahman Al-Thani Foreign Minister of Qatar said that return to nuclear deal with the Islamic Republic of Iran is in favor of everyone, adding that Persian Gulf Cooperation Council (PGCC)’s member states should establish ties with Iran away from any interference.

Regarding the recent developments in Afghanistan, he said that withdrawing forces from Afghanistan is wrong and Qatar is in direct contact with Washington and Taliban in this regard.

Settling the existing problem is not possible without interacting with interim government of Afghanistan, he added.

“We have fulfilled the role of an impartial mediator and seek to make Afghanistan a stable and inclusive country. We are in touch with all Afghans and we preserve a good relationship with them. An approach based on international cooperation must be adopted on Afghanistan.”

Elsewhere in his remarks, Qatari foreign minister pointed to Iran’s nuclear deal, JCPOA, and added, “It is in our interest to restore the nuclear deal and we will provide any kind of necessary support to make it happen.” 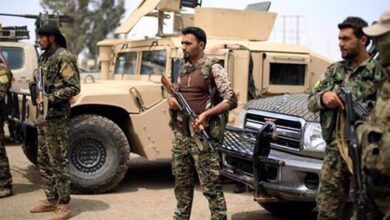 Syrian army troops block US convoy in Hasakah, force it to return

Us president confirmed 400 US soldiers will stay in Syria