The Israeli military has fired artillery shells into southern Lebanon, shortly after the regime’s aircraft launched a number of missiles at targets near the northwestern Syrian city of Aleppo.

The Israeli army said in a statement that two rockets had been fired from Lebanon at the northern part of the occupied territories early Tuesday morning, setting off warning sirens in the Western Galilee region.

The statement added one of the rockets was intercepted by the so-called Iron Dome missile system, while the second projectile fell in an open area

There were reportedly no injuries or damage.

The Israeli military said it later fired artillery shells at targets in Lebanon. It gave no details about which targets were hit or who was behind the rocket fire.

Back on May 19 and amid Israeli bombardment of the besieged Gaza Strip, the Lebanese territory was targeted by Israeli artillery shells after rockets were launched from southern Lebanon towards the occupied territories.

Lebanese media outlets said the rockets had been fired from the village of Seddiqine in southern Lebanon.

Avichay Adraee, a spokesman for the Israeli military, said in a post on Twitter at the time that four rockets had been fired from Lebanon, claiming that one was intercepted by Israel’s missile systems, another landed in an open area and two others fell in the sea.

No casualties have been reported so far. An investigation is now underway to determine the extent of damage.

Lebanese al-Mayadeen television news network stated that Israel’s target was a factory and research center on the outskirts of al-Safirah.

Tel Aviv mostly keeps quiet about the attacks on Syrian territories which many view as knee-jerk reaction to Syrian government’s increasing success in confronting terrorism in country.

The regime has been a main supporter of terrorist groups that have been fighting the government of President Bashar al-Assad since militancy erupted in Syria nine years ago.

Syrian government forces have taken back many areas once controlled by the terrorist groups. 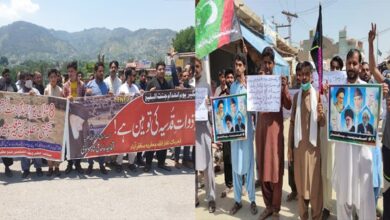 Demolition Day of Janat-ul-Baqi, nationwide protests, demand for reconstruction of shrines of Ahl-e-Bayt and companions of Prophet PBUH