Eight militants of US-backed QSD militia on Wednesday were killed and others injured in attacks on their vehicles and their positions in Deir Ezzor and Raqqa countryside during the past 24 hours.

In Deir Ezzor, the operations of targeting the militia groups and their movements continued as local sources, from the eastern countryside, said that unknown persons launched an attack on the headquarters of QSD militia in Theban, killing two of its militants and wounding others.

The sources pointed out that the explosion of an explosive device planted by unknown persons in the car of a leader of QSD militia in the town of Al-Kubar in the western countryside of Deir Ezzor resulted in the killing of the leader and the destruction of the car.

Another QSD militant was killed by fire of unidentified persons in the village of Ghariba Al-Sharqia, north of Deir Ezzor.

Local sources indicated that unknown persons targeted, with automatic weapons, a patrol of the QSD militia on the road between Souq al-Hal and Bab Baghdad on the eastern outskirts of the city of Raqqa, which resulted in direct casualties in the ranks of the militia’s armed men.

In the northern countryside of Raqqa, local sources said that three QSD militants were killed, among them a leader, by fire of unknown persons in the vicinity of the village of Al-Mushairfa, north of Ayn Issa, while another militant was killed by a landmine explosion in the village of Saida.

On Monday, an explosive device planted by unidentified persons exploded in one of the headquarters of the QSD militia in the village of Al-Saadia, northeast of Al-Hasaka, wounding a number of militia gunmen and causing material damage to the headquarters.

Two civilians martyred, 19 injured due to shell attack in Damascus 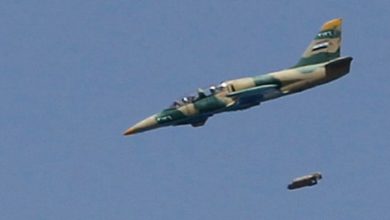