More than 900 pro-Turkish Syrian fighters have returned home following the end of hostilities between Armenian and Azerbaijani forces in the Nagorno-Karabakh region, according to the UK-based Syrian Observatory for Human Rights (SOHR).

Last month’s Russian-brokered truce ended six weeks of conflict between Armenia and Azerbaijan with the deployment of almost 2,000 Russian peacekeepers following Azerbaijan reclaiming significant territory in the mostly ethnic Armenian enclave which is internationally-recognised as belonging to Azerbaijan.

“More than 900 fighters from pro-Ankara factions have returned to Syria in several waves”, the most recent of which was 27 November, SOHR Director Rami Abdel Rahman said on Wednesday citing “reliable sources”.

More fighters are expected to return in the coming days, especially to Syria’s northern areas under control of Turkish-backed factions, including Afrin, Jarabulus and Al-Bab, Abdel Rahman said.

However, in mid-November, “very reliable sources” informed the SOHR that the Turkish government would maintain groups of Syrian fighters in Nagorno-Karabakh, despite the suspension of military operations and the ceasefire agreed between Armenia and Azerbaijan.

In October it was revealed that many of the Syrians felt deceived or misled when being recruited with many dispatched to the front lines days after arriving in the country.

“They loaded us into troop carriers, we were wearing Azeri uniforms, and each of us was armed with a single Kalashnikov weapon. Most of the people here are poor civilians who wanted the money, not soldiers, stopped the car and we were surprised that we were in the line of fire. We did not even know where the enemy was,” disclosed one of the fighters at the time. 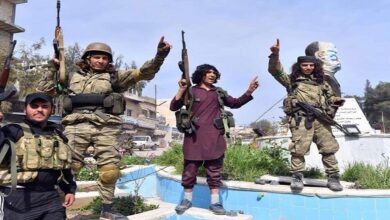 New batch of Ankara-backed Syrian mercenaries to head to Azerbaijan