Syrian Ministry of Foreign Affairs and Expatriates has censured the European Union (EU) over prolonging its sanctions against the war-ravaged Arab country for another year, stating such measures expose the hypocrisy of the bloc and spurious statements of its officials.

“These sanctions are a flagrant violation of the most basic humanitarian principles and the international law… They are a crime against humanity,” Syria’s official news agency SANA quoted an unnamed source at the ministry as saying late on Thursday.

He added, “It was no surprise for the EU to renew its sanctions on Syria, particularly as the United States had earlier taken the same step. The measure underlines that the EU has lost its independence in terms of decision-making, and is subjugated to US policies.”

“The decision reconfirms the EU’s deep involvement in the war on Syria and its unstinting support for terrorist groups. The union is, therefore, fully responsible for Syrian bloodshed, and exacerbation of people’s sufferings due to cruel and unjust sanctions,” the source pointed out.

Earlier in the day, the European Council, headquarters of the 27 EU countries, announced in a statement the renewal of its sanctions against Syrian President Bashar Assad and other top political officials, military officers and business people for another year.

The sanctions would be extended until June 1, 2021, more than a decade after the Syrian conflict began.

The EU imposed the first round of its sanctions against Syria in May 2011. They include travel bans, asset freezes and measures targeting operations like oil imports, certain investments as well as technology transfer.

The bloc claims the measures are designed to avoid hindering the delivery of humanitarian aid.

This is while Syria’s Ambassador to the United Nations Bashar al-Jaafari said earlier this month that unilateral sanctions imposed by Western countries are hampering the Damascus government’s efforts to import medicine and other medical supplies to fight the deadly novel coronavirus outbreak in the country.

“Unilateral coercive economic measures hinder Syria’s ability to meet the basic needs of its people and confront the epidemic of the novel coronavirus,” Jaafari said on May 10 through the video link at a symposium organized by the Sanctions Kill coalition, which comprises a group of activists working to promote anti-sanctions campaigns.

The Syrian diplomat noted that sanctions continue to reduce the capacity of Syria’s public and private health sectors since the measures have affected the country’s banking sector, left it bereft of financial resources, made money transfers difficult and negatively influenced the fields of energy, industry, transport, communications as well as domestic and foreign trade. 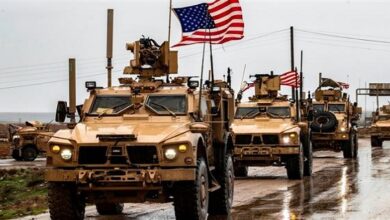 US military brings weapons, equipment to bases in Syria’s Hasakah