The United Nations rights chief Michelle Bachelet has warned of the deteriorating situation in Syria describing that as “ticking time bomb” as the Daesh terrorists outfit exploit the COVID-19 pandemic and heighten attacks on civilians.

“Various parties to the conflict in Syria…appear to view the global focus on the COVID-19 pandemic as an opportunity to regroup and inflict violence on the population,” Bachelet said on Friday.

“We are receiving more reports every day of targeted killings and bombings from one end of the country to the other, with many such attacks taking place in populated areas,” she added.

The UN official voiced particular concern about an increase in Daesh attacks in the country.

“The deteriorating situation is a ticking time-bomb that must not be ignored,” she said.

According to the UN rights office, at least 35 civilians have been killed in improvised explosive devices (IED) attacks in April, killing 28 more civilians than in bombings last month.

The rights office said that a total of 33 IED attacks had occurred since the start of March, 26 of which hit residential neighborhoods and seven others which targeted markets.

Most of the attacks occurred in the northern and eastern parts of the country, it said.

Syria has been grappling with a brutal nine-year foreign-backed insurgency which resulted in terrorist control over large swathes of the country.

Nonetheless, the Syrian government managed to gradually push back terrorist forces with the assistance of its allies, limiting terrorist presence mostly to the country’s northwestern Idlib province.

Attacks on Syrian forces have, however, increased in the past week, with nine policemen being killed in the southwestern Dara’a province and eleven soldiers being killed in a Daesh attack in eastern Syria.

The uptick of attacks come as Syria confirmed its first coronavirus case in late March.

According to the Syrian Health Ministry, 47 cases have so far been confirmed in the country, three of which have led to death.

‘Another spiral of extreme violence’

Speaking on Friday, Bachelet said that if “current patterns of violations” continue to spread, there is a risk the country will “enter another spiral of extreme and widespread violence”.

The rights chief urged different sides in Syria to adhere to UN Secretary-General Antonio Guterres’ call for a global ceasefire amid the pandemic.

“I urge all those continuing to fight, kill and displace the battered and beleaguered Syrian people to step back, and give peace a chance,” she said. 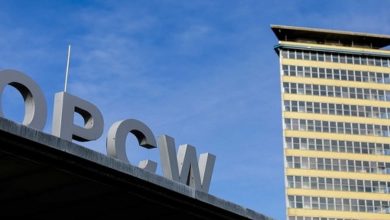 Russia, Iran, Syria united against US acts of aggression