Syrian army units continued on Friday military operations against Erdogan’s regime-backed terrorist organizations in Idlib countryside, and conducted intensive strikes against their positions and movements in direction of Saraqeb, inflicting heavy losses upon them.

SANA reporter said that the army units continued to target terrorists on the direction of Saraqeb in Idlib southeastern countryside and carried out intensive rocket strikes and artillery bombardment against the terrorist groups’ positions, supply routes and movement axes, inflicting heavy losses upon terrorists in personnel and destroying a number of their armored vehicles and cars.

The reporter added that the terrorist groups in Idlib countryside receive direct military support by the forces of Turkish regime in their attacks through providing all kind of artillery, rocket and drone support through which the positions of the Syrian army have been targeted.

Earlier, the Russian Defense Ministry said that the Turkish troops who came under fire in Idlib, and 33 of them were killed, were among terrorists. 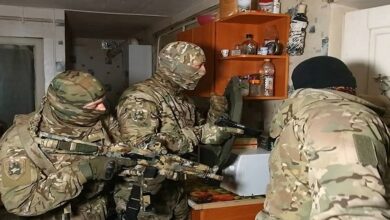 US Launches Tomahawk Cruise Missiles at Airbase in Syria