Lebanese Foreign Minister, Adnan Mansour, stressed that the political solution is the only way to get Syria out of the crisis and dialogue is the mechanism of the solution.

In an interview with al-Diplomasiyeh magazine published Thursday, Mansour said what is most dangerous the events in Syria is leaving the extremist groups move around freely in the region and hit whatever and however they want, warning that this would lead many states into an unknown tunnel.
He added that what is taking place in the region is “grinding” economies and infrastructure in many states to force them into submission, paralyze their resistance activities and tame their political decision.
The Lebanese Foreign Minister affirmed that the issue in Syria is not one of freedom and democracy because democracy cannot be achieved by the force of arms, adding THAT what is being witnessed throughout the region is a form of chaos.
He pointed out that the Syrian leadership with its firm principles, particularly with regard to its stance towards the resistance and the Arab-Israeli conflict, constitutes a real obstacle in the path of some foreign schemes, adding that changing the equation in Syria serves the sponsors of those schemes.
On the issue of the Lebanese people abducted by terrorist groups in northern Syria, Mansour expressed hope that the Turkish authorities, which he said overtly provide support and shelter to the Syrian opposition, will use their influence to communicate with the groups they provide support to in order to secure the release of the abductees.
Families of Lebanese Abductees Continue Protest against Turkish Government
In the same context, families of the Lebanese abductees staged Thursday morning a sit-in outside the Turkish Cultural Center in the middle of the Lebanese capital Beirut and blocked the road leading to the Center in protest against the Turkish government.
The Lebanese national news agency said the abductees’ relatives demanded that the Turkish government exert pressure on the kidnappers to release their sons, noting that the Lebanese security forces blocked the road in front of the Turkish Cultural Center.
The families also staged another sit-in in front of the Turkish Airlines company and prevented the staff from entering it.
The abductees’ relatives have been peacefully protesting for a month now in an attempt to pressure the Turkish government that have influence on the gunmen to use this influence and release the abductees who have been held for a almost year. 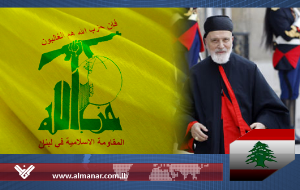 Hezbollah ‘Insulted’ by Patriarch; Sfeir Has Nothing to Clarify!