Under the cover of medical evacuation to United Nation’s elements from Syria, the United Nations Interim Forces in Lebanon [UNIFIL] in Southern Lebanon officially requested from the Lebanese authorities to use Riyak Military Airport.

The suspicious demand resembles a clear violation to the UN resolution 1701. However, the “blue helmets'” blatant interference received a formal OK from the Lebanese authorities.
Meanwhile, the move raised big questions about the contradicting stances, particularly the governmental approval of self-dissociation policy.
In this context, Lebanese Strategic expert Brigadier Amin Hoteit, expressed his great astonishment over the UN demand at this particular time.

“The move of the international forces from its area of operations in the Litani region to Baalbek, and specifically to Riyak Airport, formed a clear violation to UN resolution 1701,” he said.
He further reminded that “Beirut International Airport is the only authorized airport for the movement of UN forces.”
In an interview with al-Ahed news site, Hoteit feared that “UNIFIL occasional and circumstantial centers would turn to factual centers on the ground in preparation for a UN resolution, aimed to expand the 1701 resolution of and legitimize the presence of these forces.”

He further slammed the Lebanese government’s hasty position in approving the UN demand, given that the distance between Riyak and Beirut airport does not exceed one hour and a half, even in large vehicles.
In parallel, the retired Lebanese general confirmed that “there is no justification for such permission.”
Hoteit, who does not view that the government’s decision doesn’t contradict with the policy of self-dissociation, sets the UNIFIL’s request in the context of bypassing the 1701.
However, he warned that such moves might carry the transmission of this waiver to other aspects.
Meanwhile, the military specialist excluded the presence of an international resolution to drag Lebanon into the Syrian crisis, despite the fact that the West tries to push Lebanon into the crisis by turning it into a platform for attacking Syria as well as into an incubator for terrorists.

He also commented on the Lebanese as-Safir daily’s information that Western and Gulf aircrafts carry rockets, weapons, and ammunition were allowed to pass into Lebanon for three months.
“This is a weird and surprising decision, particularly that its content and circumstances are not clear,” he said.
However, he assured that “there exists no correlation between the two events with the expectations of a major security development in Syria.”
In conclusion, Hoteit hoped that “what the domestic arena is recently witnessing doesn’t form a gateway to implicate Lebanon into crisis, that it can’ t afford.” 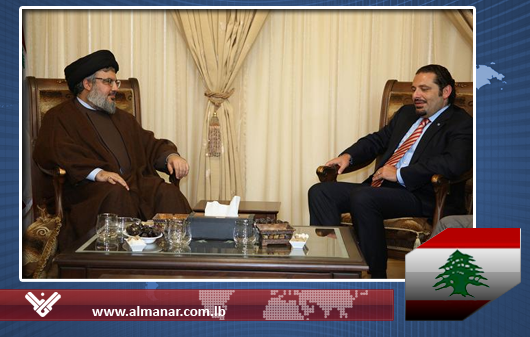 ‘No Place for Fears: Hariri’s Soul Not Reason for Strife’!