Hezbollah vehemently condemned on Monday the Israeli terrorist crime against activists on board the Gaza-bound â€œFreedomâ€ flotilla that killed 19 unarmed activists and injured dozens others.Â

In a statement, Hezbollah denounced the â€˜horrible terrorist crime committed by the Zionist occupation forces against innocent civilians on a human mission to express solidarity with the Palestinians besieged in the Gaza strip.â€

The statement added that the crime was another proof of the â€œinherent evil in Zionists which targets all human beings regardless of their confession and raceÂ as long as they’re ready to stand by righteousness in the face of the persistent Zionist terrorism against the Palestinians.â€

The Hezbollah statement underlined â€œthis atrocious crime is the materialization of the inherent force of tyranny which has escalated in the past years due to the unlimited Western support to the Zionist scheme, and due to the wrong political bargaining of some Arab regimes.â€

Targeting civilians and inflicting losses among them is an old Israeli policy emanating from the fundamental ideology of its leaders who established the usurping entity, Hezbollah said. â€œThis policy was present well before the establishment of the occupation entity in Palestine and interpreted itself on different occasions,â€ the statement added.Â

Hezbollah stressed it believed that â€œthis crime should constitute a turning point in dealing with the usurping entity at the level of all international powers. The party considers international institutions are in front of a historic test to prove its already shaken credibility. They are demanded that they do their obvious duty to face Zionist crimes the last but not least of which was the attack on activists representing 40 countries.â€Â

The statement also called on the whole world not to keep mum at Israelâ€™s crimes and initiate concrete steps to reject oppression â€œby cutting all sorts of ties with the Zionist entity and holding Israel responsible for targeting innocent civilians on board the ships.â€

â€œHezbollah believes that Arab and Islamic leaders are required to adopt the position of their peoples, because condemnations are no longer sufficient given the bloody scene imposed by Israel. They are also required to cut all ties with Israel with concrete strategic steps to break the siege on Gaza and the West Bank and to support the Palestinian people with every possible means that would help them free their land and put an end to the Zionist occupation nightmare.â€

Hezbollah offered deep condolences to the families of the victims, and paid special tribute to the Turkish people for standing by their Palestinian brothers with the support of the Turkish leadership that continues to reject Israel arrogance.â€ 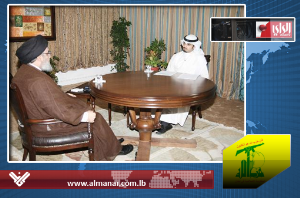 S.Nasrallah: “We are witnessing a clear Saudi failure and a vivid Yemeni Victory”