A senior Iranian official says the Islamic Republic will soon supply the Lebanese army with necessary military equipment to help the nation deal with the threats it is facing.

Secretary of Iran’s Supreme National Security Council (SNSC) Ali Shamkhani, who is in Lebanon to hold talks on defense cooperation, made the announcement following a meeting with Lebanese Prime Minister Tamam Salam in the Lebanon’s capital, Beirut, on Tuesday.

The Iranian official said Iran’s assistance will be delivered to Beirut during an upcoming visit by Iranian Defense Minister Brigadier General Hossein Dehqan to Lebanon.

He said that the Islamic Republic has no red lines for providing military aid to Lebanon to help it in the fight against terror and consolidate stability and security in the country.

Shamkhani also held talks with Hezbollah Secretary-General Seyyed Hassan Nasrallah on Tuesday, where the Iranian official praised the role of the resistance movement in defending the security and stability in Lebanon.

“Undoubtedly, Lebanese society will always be indebted to the rare and heroic diligence of … Hezbollah in countering the threat of Takfiri terrorism,” Shamkhani said.

He referred to the Lebanese nation’s trust in Hezbollah as the movement’s main “asset” which ensures the enhancement of its role and performance as a balancing force in Lebanon’s political and security arenas.

Nasrallah, for his part, pointed to the unprecedented and complicated threats facing the region and said fighting Takfiri terrorism, preventing the spillover of the crisis and insecurity to Lebanon as well as safeguarding and boosting national unity are the resistance group’s priorities.

Heading a high-ranking political and security delegation, Shamkhani arrived in the Lebanese capital on Monday night.

Syria has been gripped by deadly violence since 2011 with ISIL Takfiri terrorists currently controlling parts of it mostly in the east. 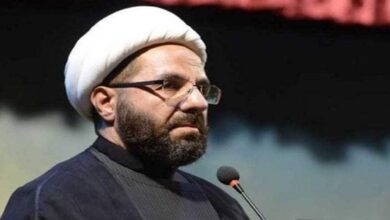 Nasrallah: Resistance is deep-rooted in public will and unbreakable