Iraqi Prime Minister Haider al-Abadi faced calls to resign as his alliance with a populist cleric who won May elections crumbled over deadly unrest shaking the country’s south. The two leading groups in parliament called on Abadi to step down, after lawmakers held an emergency meeting on the public anger boiling over in the southern city of Basra.

“We demand the government apologise to the people and resign immediately,” said Hassan al-Aqouli, spokesman for the list of Shia cleric Moqtada Sadr that won the most seats in the election.
The announcement dealt a severe blow to Abadi’s hopes of holding onto his post through a bloc — described as the biggest in parliament — unveiled just days earlier with Sadr and more than a dozen other groups.
Ahmed al-Assadi, spokesman for the second-largest list in parliament, the Conquest Alliance, condemned “the government’s failure to resolve the crisis in Basra”, where 12 protesters were killed this week in clashes with security forces.
The Conquest Alliance of pro-Iranian former paramilitary fighters was “on the same wavelength” as Sadr’s Marching Towards Reform list and they would work together to form a new government, Assadi said.
Abadi, whose grouping came third in the May polls, defended his record in parliament, describing the unrest as “political sabotage” and saying the crisis over public services was being exploited for political ends.
His government has announced the allocation of an unspecified amount of extra funds for Basra, although demonstrators say that billions of dollars in emergency funding pledged in July has failed to materialise.
The anger flared after the hospitalisation of 30,000 people who had drunk polluted water, in an oil-rich region where residents have for weeks complained of water and electricity shortages, corruption among officials and unemployment.
At least a dozen demonstrators have been killed and 50 wounded in clashes with security forces, according to the interior ministry.
The attack came after a day of rage in the southern city where hundreds of protesters stormed the fortified Iranian consulate, causing no casualties but sparking condemnation.
The wave of protests first broke out in Basra in July before spreading to other parts of the country, with demonstrators condemning corruption among Iraqi officials and demanding jobs. 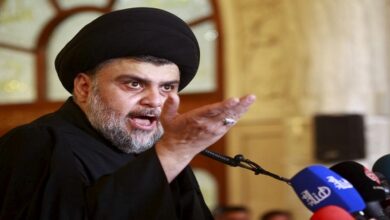