Asa’ib Ahl al-Haq has called on the Iraqi government to take action against a US bill that seeks sanctions on the group after predominately Shia blocs won most seats in last month’s parliamentary election.

The US House of Representatives unanimously voted on a draft law requiring President Donald Trump to sanction “persons that are officials, agents, affiliates of or owned and controlled by” Asa’ib Ahl al-Haq and Harakat Hezbollah al-Nujaba, another Iraqi Shia group.

The measure has been sent to Senate for approval before becoming law.

It also urged the Iraqi Foreign Ministry to take measures against the US embassy in Baghdad in response to the controversial sanctions bill.

Asa’ib Ahl al-Haq is part of the Fatah (Conquest) alliance led by secretary general of Badr Organization Hadi al-Ameri, which finished second in the May 12 election with 47 out of 329 parliamentary seats.

In an interview with the Kurdish Rudaw media network earlier this week, Ahmed al-Kinani, the head of al-Sadiqoun parliamentary bloc representing Asa’ib Ahl al-Haq, called on Baghdad to respond to the new US bill.

Kinani stressed that the sanctions would not hinder the Shia group from playing an influential role in Iraq’s security and politics.

“This is a sign of the American government’s defeat and proves that we’re moving in the right direction and we’re proud of it,” Kinani said, accusing Washington of meddling in Iraq’s domestic affairs.

“We take pride in confronting the [US] occupying forces. We have offered a lot of martyrs to our country, but ultimately we have defeated the occupiers in most areas in the country,” he added.

Additionally, Laith al-Azari, a member of Asaib Ahl al-Haq’s political bureau, emphasized that sanctions would boost the group’s capability to “confront” the US.

“Including Asa’ib Ahl al-Haq, along with some other Iraqi armed factions, on the terrorist list will increase our own ability to confront terrorism and US plans in Iraq,” he said.

Baghdad calls on Ankara to end attacks on PKK in Iraq 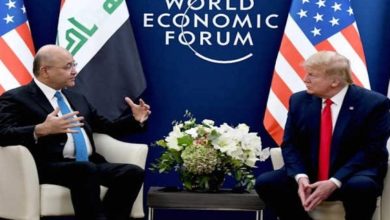