Iraqis come out in their thousands in Baghdad as well as the holy cities of Najaf and Basra to protest airstrikes on Syria by the US, Britain, and France.

Hundreds gathered in Baghdad’s Tahrir Square with Syrian and Iraqi flags on Sunday, to demonstrate their support for the Syrian people. They burned several US flags and then stomped on them.

“Stop destroying Syria as you destroyed our country,” shouted the protesters, in reference to the 2003 US-led invasion of Iraq. “No to America, no to the bombardment of Syria,” they chanted.

The Western trio fired more than 100 missiles at Syria early Saturday following an alleged chemical attack in the town of Douma near Damascus.

Syria, which surrendered its chemical weapons stockpile during a process monitored by the United Nations chemical watchdog in 2014, has rejected carrying out the attack.

The Syrian government has said the attack was staged to give the aggressors a pretext to launch the airstrikes following recent army victories against terrorists near Damascus.

Crowds also took to the streets in the cities of Najaf and Basra, south of Baghdad.

The Iraqi government warned Saturday that the Western airstrikes on Syria were a “very dangerous” development that could fuel a Takfiri resurgence in the region.

On Sunday, Iraqi Foreign Minister Ibrahim al-Jaafari warned of the huge dangers of a military escalation in Syria in a telephone conversation with Acting US Secretary of State John Sullivan.

Jaafari stated that any further act of aggression against the conflict-plagued Arab country would undermine security and stability in the Middle East region as a whole. 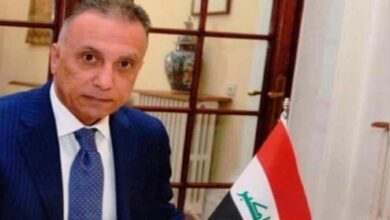