ISIL terrorists have executed hundreds of Shia Muslims in northern Iraq in what may be one of the worst atrocities yet since the al-Qaeda splinter group seized much of northeastern Syria and made huge gains in parts of Iraq, according to footage.

The video of the massacre was released by the Takfiri group Tuesday on the occasion of the Eid al-Fitr holiday, which marks the end of the Islamic holy month of Ramadan.
The 36-minute video presents a number of scenes, such as footage from bomb attacks, gun battles, ISIL parades, speeches, and Iraqis being driven off the road in drive-by shootings.
But some of the most shocking scenes are shown in the last five minutes of the video. The scenes show trucks loaded with hundreds of terrified young men – all whom appear to be no older than 30 – as they are being transported to a remote site in what is believed to be Tikrit. In the next scene, dozens of them are laying face-down in the sand with their hands bound behind their back. None of them move.
Moments later, other captives cower down as they speak to the cameraman. Some of the captives shout, one weeps as he speaks up. They are then told to stand up and walk with their hands behind their heads as one of the terrorists raises the ISIL’s flag. After a short walk, the men are ordered to lie down on the sand before each captive is shot in the head one by one. At least 50 are killed.
But perhaps one of the most horrifying scenes follows seconds later: A large open area packed with bodies – no fewer than 100, perhaps more. The video suggests more bodies are outside of camera’s point of view. Only three men are still alive: bound and facing towards those already slaughtered. Two gunmen walk up to them and kill them too, shooting them in their heads from behind.
The ISIL Takfiri group has released similar videos in the past, but the footage released on Tuesday is believed to show one of the worst atrocities yet. The group claims hundreds of Shia Muslims were killed, but it is unknown when the massacre took place.
The 36-minute video ends with a scene in which fifteen young men are being escorted to a blood-soaked path along a river, where masked gunmen await, one of whom is holding the ISIL’s flag. The victims are each shot in the head and dumped into the river one by one.
Asked for comment, a US State Department spokeswoman condemned the video, saying one of the ISIL’s primary goals is to create fear and to drive sectarian division. “We condemn these tactics in the strongest possible terms and stand in solidarity with the Iraqi people against these horrendous and senseless acts of violence,” she said.
The spokesperson, who asked not to be named, added: “Terrorists who can commit such heinous acts are a shared enemy of the United States, Iraq, and the international community. We urge all Iraqis to unite against this violence and continue to reject the path of hatred that ISIL represents.” Video Graphis is available here: http://en.alalam.ir/news/1617557 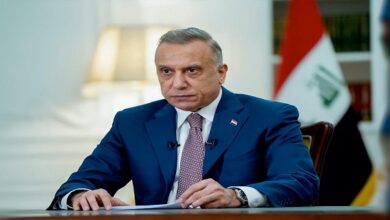 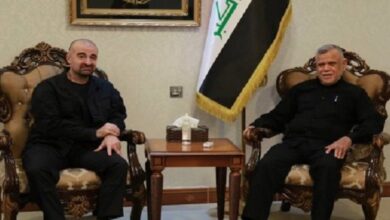 Al-Amiri, Talabani discuss the latest developments in the political situation