Prime Minister, Nuri al-Maliki said: If the Iraqis kept silent about what is going on in Anbar and Nineveh, the terrorism and terrorists arrived in Maysan.

Maliki added in a speech to a gathering for his supporters’ coalition in the city of Amara on : if we kept silent to the fight in Anbar and Nineveh, they would arrive here.

He stressed that those who are watching (not support) the army in its fight with terrorism, does not have a jealous on Iraq.

Maliki said: It’s sad that Maysan province with its oil and agriculture wealth and most of its schools build by mud, noting that the law of the infrastructure, which being failed by some political blocs, was able to achieve quality mutations in the reconstruction the country.

He added: the government continues to implement its future programs, which will depend mainly on forming the government of political majority that will be the key to solve all the problems and crises, stressing that the government of quotas has disrupted the wheel of progress in the country and it was the cause of the delay in laws and legislations. 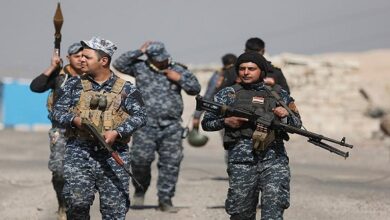 Iraqi army repels ISIL attack on base in Anbar