Iraqi leaders appealed for calm after a suicide bomber killed 25 people majority of them Shia Muslims at a Shiite foundationâ€™s offices in Baghdad, sparking fears of sectarian strife at a time of political crisis.

The attack in the center of the capital on Monday, Baghdadâ€™s deadliest blast in over four months, was followed later by an explosion near a Sunni religious foundationâ€™s headquarters, causing no casualties.

The attacks came amid a dispute between the two Muslim endowments which manage Iraqâ€™s religious landmarks over a shrine north of Baghdad, and during a protracted political standoff that has raised sectarian tensions in a country racked by brutal communal bloodshed from 2006 to 2008.

Prime Minister Nuri al-Maliki and parliament speaker Osama al-Nujaifi both issued condemnations of the violence and appealed for calm, as did United Nations envoy Martin Kobler.

â€œWe call on the people to be aware, and dismiss sectarianism and hold on to national unity,â€ Maliki said, warning of â€œenemies who do not want citizens to live in safety, stability and unity.â€

Mondayâ€™s first attack struck at 11:00 am (0800 GMT) outside the Shiite endowment in Baab al-Muadham, in central Baghdad, and left at least 25 people dead and more than 65 wounded, medical officials said.

â€œWe do not accuse anyone, but we call on the Iraqi people and especially on the sons of our religion to bury the strife because there is a plan to launch a civil war between the people, and between the Iraqi sects,â€ Massudi said.

He said the Shiite endowment had received threats in recent days because of a dispute over the Shiite Al-Askari shrine in the mostly Sunni city of Samarra.

The iconic gold-domed shrine was hit by an Al-Qaeda suicide attack in February 2006 that ignited Iraq’s bloody confessional violence.

Massudi and his aides had produced documents that attributed the management of the shrine to the Shiite religious endowment, sparking tensions with its Sunni counterpart.

The attack also fell on a significant day for Shiite Muslims — the birthday of Imam Ali, a cousin and son-in-law of the Prophet Mohammed, who is a revered figure in Shiite Islam.

AFP journalists near the site of the attack said security forces cordoned off the area and barred anyone from approaching, while emergency workers searched for survivors in the remains of the endowment headquarters.

Several cars and nearby buildings were badly damaged by the explosion, and helicopters hovered overhead.

Later on Monday, a statement on the Sunni endowmentâ€™s website said that a mortar round struck near its headquarters in Adhamiyah in north Baghdad, but did not cause any casualties.

The latest bloodshed comes less than a week after a spate of bombings in Baghdad left 17 dead on May 31, shattering a relative calm in the city.

The spike in attacks coincides with a ratcheting up of months-long tensions in which several political parties have called for the prime minister to be unseated.

Monday’s death toll was the highest from a single attack in Baghdad since a suicide bomber blew up a car outside a hospital on January 27 killing 31 people.

Violence in Iraq has declined dramatically since its peak in 2006-2007, but attacks remain common, especially in Baghdad. A total of 132 Iraqis were killed in violence in May, according to official figures. 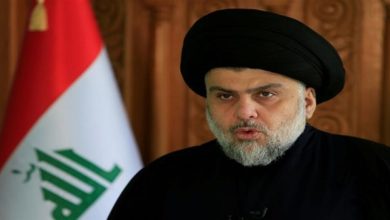