Iraq has ordered anti-Iran Mujahedin-e Khalgh Organization (MKO) members to move from the Ashraf Camp “without delay”, a government official and the UN have said.
“The state has the right to order them to leave,” Ali Mussawi, spokesman for Iraqi Prime Minister Nuri al- Maliki, told AFP.

“There is an order for them to leave,â€ he added.
The UN’s mission to Baghdad said in a statement that it believed the Iraqi government “will move to enforce this order without delay”.
That would require the 42 remaining residents of Camp Ashraf to be moved to Camp Liberty, a former US military base on the outskirts of Baghdad, while MKO members await relocation outside of Iraq.
Baghdad opened a probe into the events surrounding the deaths of 52 MKO members, which occurred on Sunday at Camp Ashraf in Diyala province, but accounts of the unrest still differ markedly.

Iraqi officials and the MKO have offered conflicting narratives of how the 52 died.

They believe infighting within the MKO caused the deaths.

The MKO members however claim Iraqi forces entered the camp, killed 52 of its members and set fire to the group’s property and goods.

Around 3,000 members of the group were moved from Ashraf last year to Liberty, but about 100 stayed on at the old camp to deal with remaining property and goods.

The MKO is listed as a terrorist organization by much of the international community, and is responsible for numerous terrorist acts against both Iranians and Iraqis.
The group is especially notorious in Iran for siding with former Iraqi dictator Saddam Hussein during the 1980-1988 Iran-Iraq war.

MKO was founded in the 1960s to oppose the shah of Iran, and after the 1979 Islamic revolution that ousted him it took up arms against Iran’s new government.

Christian Hashd Al-Shaabi Commander: No Place for US Military Bases in Iraq 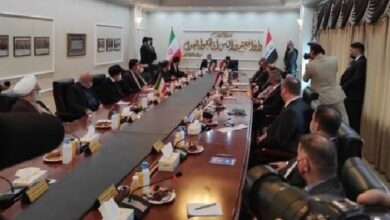