Local government officials warned Saddam Hussein loyalists to move out of the Shiite province of Najaf in central Iraq within 24 hours or face an “iron fist.”

They demanded the exodus after a meeting to discuss security in the wake of a triple bomb attack last week in Najaf, about 150 kilometers (90 miles) south of Baghdad, that left up to 15 people dead. “The Baath gang of Saddam has one day to leave the province or we will use an iron fist against those who have failed to distance themselves from the Baath and Al-Qaeda,” the officials said in a statement. The leader of the provincial council, which is dominated by the party of Prime Minister Nuri al-Maliki, blamed the bomb attack on Baathists, referring to Saddam’s outlawed Baath party. “The council’s next measure will be to purge local government institutions of Baathists,” said the statement, which also asked Baghdad to use its intelligence services to identify wrongdoers. Khaled Jashami, a member of the Supreme Iraqi Islamic Council (SIIC), one of the country’s biggest Shiite parties, however, was adamant that drastic measures were needed in Najaf. “This decision aims to target those who have refused to repudiate the Baath party and its ideas, who have on their hands the blood of innocents in Najaf and other cities,” he said. “We took this decision to rid Najaf of Baathist ideas. We will seriously work to purge the security services and government institutions,” he added. In response, Baghdad government spokesman Ali al-Dabbagh insisted that “no plan existed” to sack interior and defense ministry employees. Attacks in Najaf are rare but last Thursday’s incident caused a large number of casualties, although accounts of the numbers varied.

An interior ministry official in the capital said 15 people were killed and 25 wounded, while a local official in Najaf said three people died but gave a much higher wounded toll of 80, including 15 in serious condition. 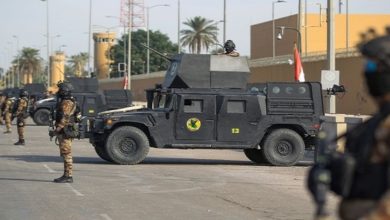 Iraq tells US: Donâ€™t delist MKO as a terrorist group