Iraq says the areas under the grip of Daesh Takfiri terrorist group in the Arab country have significantly decreased to only 14 percent, compared to almost triple that number recorded two years ago.

Iraq’s government spokesman, Saad al-Hadithi, said in a televised statement on Wednesday that the Iraqi army had retaken around two-thirds of the territory captured by Daesh in their sweep across Iraq in 2014.

“Daesh’s presence in Iraqi cities and provinces has declined. After occupying 40 percent of Iraqi territory, now only 14 percent remains [under their control],” Hadithi added.

The northern and western parts of Iraq have seen violence by Daesh since the group began an offensive in the Iraqi territory in June 2014.The Takfiri elements frequently launch deadly attacks in the areas under the government’s control.

On Wednesday, three separate bombings claimed by Daesh in and around the Iraqi capital left at least 93 people dead and 165 others wounded in the deadliest attacks in Baghdad this year.

Fresh gains by the Iraqi army against terrorists

In another development on Wednesday, the Iraqi security forces liberated two villages from Daesh in the city of Khan al-Baghdadi in western Anbar Province, Iraq’s al-Forat news agency reported.

The advance was the latest in a string of gains by the Iraqi military and allied volunteer fighters against Daesh in the conflict-ridden country. 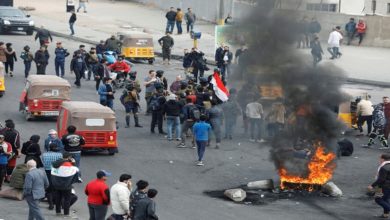 Protesters return to the streets in cities across Iraq, demanding reforms, new govt.

Iraq distributed evidence of Riyadh being behind Fallujah unrest