ISIL Takfiris have executed at least 46 members of a tribe fighting against the terrorist group in Iraq’s Anbar Province, sources say.

A local leader and a doctor said on Wednesday that tribesmen from the Albu Nimr tribe were slain in an area controlled by the ISIL cult north of the town of Hit last week.

The Albu Nimr tribe has been resisting against the ISIL invasion since early October.

The ISIL militants have been committing terrible atrocities in Iraq and Syria, including mass executions and beheading of local residents as well as foreign nationals.

The development comes as the Iraqi armed forces launched fresh anti-ISIL operations on Tuesday to liberate the town of Amriyat al-Fallujah, situated in the western province of Anbar, after they managed to recapture the town of Jurf al-Sakhar near the capital, Baghdad.

The town, located some 40 kilometers (25 miles) from Baghdad, is strategically important to the ISIL Takfiris as it connects Anbar to the central province of Babil.

“Last night, ISIL terrorists were located where we stand now, but now they are in Amriyat al-Fallujah and we are still pursuing them,” Abu Fadl Abbas, an Iraqi army officer, said in an interview with Press TV.

Iraqi army soldiers have been fighting the ISIL terrorists for nearly six months now. The troops have pledged to make more gains in their battle against the extremist group, which has large swathes of land under control in Iraq and Syria.

Reports also say Iraqi armed forces surrounded the northern city of Baiji on Tuesday as they gear up to liberate the strategic oil-rich city from the ISIL Takfiri militants. 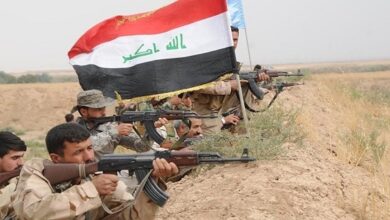 45 ISIL militants killed by poison, dozens others taken to hospital