Iraq’s military officials say an attack on the country’s K-1 military base, which killed an American contractor, was not carried out by the Popular Mobilization Units (PMU) forces, as rockets were fired from an area frequented by the Daesh Takfiri terrorist group.

According to a report published by The New York Times on Thursday, “Iraqi military and intelligence officials have raised doubts about who fired the rockets” on December 27 on the base that houses US and Iraqi forces near the northern city of Kirkuk.

The officials said “they believe it is unlikely” Kata’ib Hezbollah, a subdivision of the PMU or Hashd al-Sha’abi anti-terror forces — which the US has blamed for the attack — “carried it out,” the newspaper wrote.

Two days later, the US said it had targeted weapons caches or command and control facilities linked to Kata’ib Hezbollah in western Iraq, as well as eastern Syria with airstrikes.

The PMU said afterwards that as many as 25 of its fighters had died in the strikes, vowing to avenge the “aggression of evil American ravens.”

The deadly US raids sparked angry protests in front of the US Embassy in Baghdad’s heavily-fortified Green Zone, with demonstrators calling for the expulsion of all Washington-led forces from the Arab country.

The Iraqi officials cited by the paper said they had doubts whether the Popular Mobilization Units offshoot staged the attack “based on circumstantial evidence and long experience in the area where the attack took place.”

The area used for launching the rockets is notorious for Daesh attacks, they said. The outfit would normally try to keep PMU fighters off the areas that it wants for its turf given its signature way of confronting all those who do not subscribe to its radical ideology, the officials added.

“All the indications are that it was Daesh,” said Brig. General Ahmed Adnan, the Iraqi chief of intelligence for the federal police at K-1. “I told you about the three incidents in the days just before in the area — we know Daesh’s movements.”

Daesh had launched three attacks relatively close to the base in the 10 days before the attack on K-1, prompting Iraqi intelligence officials to warn the US about a potential attack on the base.

“We as Iraqi forces cannot even come to this area unless we have a large force because it is not secure. How could it be that someone who doesn’t know the area could come here and find that firing position and launch an attack?” Adnan asked.

Intelligence officials, meanwhile, said it was difficult to assess the American assertions without receiving American intelligence. They said they saw nothing unusual about the truck or the rockets used in the attack that would have connected them to Khata’ib Hezbollah.

The truck was a standard Kia pickup, except that its bed had been fitted with rocket launchers, they said. The rockets — 107 mm katyushas — are used by all sides in Iraq.

American officials, however, insist that they have “solid evidence” that Khata’ib Hezbollah carried out the attack, “though they have not made it public,” The Times said.

Iraqi officials have complained that Washington has refused to share with them any of the alleged evidence while complicating any Baghdad-authorized probe into the incident.

“We have requested the American side to share with us any information, any evidence, but they have not sent us any information,” Lt. Gen. Muhammad al-Bayati, the chief of staff for former prime minister Adel Abdul-Mahdi, said in an interview.

“American investigators removed any rocket fragments and one unexploded rocket from the Iraqi side of the base, so it would be difficult for the Iraqis to conduct a deeper forensic investigation of their own,” The Times wrote.

The director general of Iraqi Intelligence and Counterterrorism, Abu Ali al-Basri, also said Baghdad had refused to consult Baghdad before carrying out the December 29 attacks on Khata’ib Hezbollah.

The PMU contributed significantly to Baghdad’s fight against Daesh during the outfit’s 2014-2017 attacks on Iraq, which led to its integration into the country’s official defense force.

The fighters’ involvement in Iraq’s defense affairs has, however, never gone down well with Washington, which went as far as killing one of its key commanders Abu Mahdi al-Muhandis among others during a set of airstrikes targeting the Iraqi capital in early January. 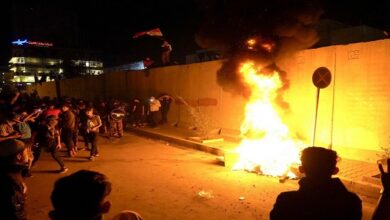