Grand Shia cleric, Ayatollah Nasser Makarem Shirazi was angered by the depiction of members of Shia imam’s households in “Hussein, Who Said No” (Rouz-e Rastakhiz), a blockbuster about the uprising of Imam Hussein, which premiered at the 32nd Fajr International Film Festival in Tehran last week.

In a letter sent to the Iran Cinema Organization on Sunday, Ayatollah Makarem Shirazi wrote, “A significant number of people have complained to my office that ‘Hussein, Who Said No’ has graphically depicted the faces of Hazrat Abbas and a number of martyrs of Ashura.

“We know that this action will cause a negative impact and they have also compalined about the quality of narration of some historical events.

“Does the Iran Cinema Organization plan to infringe upon sanctities and ignore the redlines?”

A certain group of people led by a number of major eulogists of the mourning ceremonies for Imam Hussein during the month of Muharram also gathered at Tehran’s Ark Mosque on Sunday to protest against the film directed by Ahmadreza Darvish, who is mostly known for his films on the 1980-1988 Iran-Iraq war, which is known as the Sacred Defense in Iran.

“Distortion of the facts and disrespect for the Prophet’s Household are never acceptable,” Coordination Council of Hezbollah Forces Director Hossein Allahkaram said during the meeting.

“Our remarks are not a criticism but are a protest,” he added.

Iran Cinema Organization Director Hojjatollah Ayyubi responded to the letter during his speech at the closing ceremony of the Fajr Film Festival in Mashhad on Sunday.

He said that before the production of the film, its producers had gained the necessary fatwa and permission from the ulama for the depiction of Hazrat Abbas, the brother of Imam Hussein.

“Any criticism about the facts and the context of the movie should be discussed by the producers and the representatives of the ulama in an appropriate peaceful atmosphere,” he added.

“Unfortunately, sometimes big national projects may be attacked for party interests and political purposes. But, I hope this atmosphere is removed and the film is discussed by experts in a peaceful environment,” he stated.

In addition, Minister of Culture and Islamic Guidance Ali Jannati has also commented about the issue.

“The ulama’s concerns about the film should be taken into consideration before the screening of the film,” he said on the sidelines of a press conference on Monday.

Darvish spent about nine years completing “Hussein, Who Said No”, which was previously known as “Resurrection Day”.

A large number of professionals were hired for the project, which was completed by commercial sponsorship from a number of major governmental organizations.

The film is about the uprising of Imam Hussein against the tyranny of the Umayyad dynasty on Ashura, the tenth day of Muharram on which the Imam and his companions were martyred in 680.

The faces of Hazrat Ali-Akbar and Hazrat Ali-Asghar, the sons of Imam Hussein, and Hazrat Qasim, the son of Imam Hassan have been depicted graphically in scenes of the film.

The depiction of Prophet Muhammad and his household in any art production are not allowed. 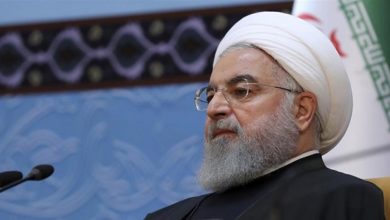 Iran’s President Rouhani: People of region will resist US oppression