A senior Iranian official has reiterated the Islamic Republic’s support for the Palestinian cause, warning about “unfounded excuses” by the United States and the Israeli regime to hinder the current campaign against terrorism in the Middle East.

“The US and the Zionist regime [Israel] feel threatened by any balance shift in the region in favor of [regional] people and governments engaged in the fight against terrorism,” Secretary of Iran’s Supreme National Security Council (SNSC) Ali Shamkhani said in a meeting with Deputy Head of Hamas’ Political Bureau Saleh al-Arouri in Tehran on Saturday.

“They seek to obstruct the path of anti-terrorism fight by bringing up unfounded pretexts such as blocking Iran’s regional sway,” he added.
In line with its revolutionary and Islamic principles, Iran has always defended Palestine’s cause, Shamkhani said and noted that the relentless fight against the Israeli regime was the core, strategic and unchangeable policy of the resistance front.

The SNSC secretary expressed hope that Hamas would continue its revolutionary approach and battle against the Tel Aviv regime and said Takfiri groups and their allies have regretfully carried out inhumane and non-Islamic measures which have tarnished the image of Islam.

Shamkhani emphasized that any measure which would result in the Palestinian cause losing its status as the first priority of the Muslim world or promote reconciliation with the Israeli regime would be an unforgivable act of treachery against all Muslims.

He once again urged all Muslim countries to make use of their potential and defend the Palestinian resistance.

Al-Arouri, for his part, commended Iran’s important support for the Palestinian people and said Hamas leaders are determined to boost cooperation with Iran.

He condemned Takfiri groups’ acts of violence in the name of Islam and said such inhumane measures are aimed at serving the interests of the US, Israel and their allies.

Judiciary Chief: Iran to Give Crushing Response to Any Israeli Aggression 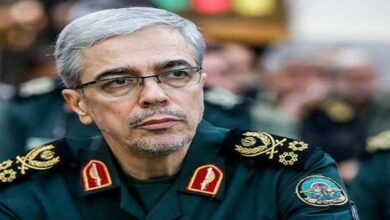