Tehran has once again slammed Washington’s recent belligerent rhetoric and measures against Iran, saying the world is currently witnessing age-old enmity of the United States towards the Islamic Republic under the administration of President Donald Trump.

The Iranian official said the news coming out every day on Trump’s decisions, false remarks by some new US officials, in addition to widespread anti-Trump protests both at home and abroad “clearly show a change of president in the US.”

After taking office, the new US president ordered sweeping travel bans against a number of Muslim-majority countries, including the Islamic Republic. The order was followed by widespread domestic and international backlash.

Qassemi further said, “There may have been changes inside the US, but what seems to have remained unchanged is the US hostility toward Iran and the Iranians.”

The Iranian nation and government have also remained unchanged in terms of their resolve and determination to pursue independence, Qassemi said, adding that Iranians are resolved to continue the path of “dignity, wisdom and vigilance” in the face of enemy plots as well as excessive demands by the White House officials.

On Tuesday, Spicer claimed that “Iran is kidding itself if they don’t think there’s a new president in town.” 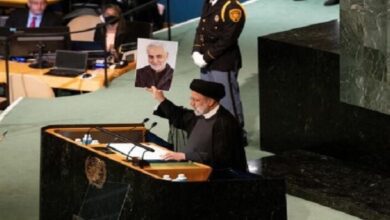 Raeisi calls for prosecution of Trump over Gen. Soleimani’s assassination