Addressing a large and fervent congregation of people on Tehran University campus on Friday, Ayatollah Emami Kashani said, “Today the ISIL terrorists say that they are Muslims, but they confront Islam and they commit crimes in the name of Islam.”

He reiterated that the Takfiri terrorist groups, including the ISIL, have not even said a word against Israel, and even Israel accepts and treats their wounded in its hospitals.

In November, Iranian Deputy Foreign Minister for Arab and African Affairs Hossein Amir Abdollahian took the sponsors of terrorism responsible for the November 13’s tragic events in Paris which killed over 150 people, and said they ignored Tehran’s warnings about the backfiring of their supports for ISIL.

“Certain regional and trans-regional states helped the ISIL to be born. We had warned that those countries which support the ISIL should know that these insecurities would spread to their countries too,” Amir Abdollahian told reporters in Tehran.

“We cannot say explicitly that which country has played a role in the formation of the ISIL but (we can say that) ignoring those warnings ended in such consequences,” he added.

In June 2014, Iranian President Hassan Rouhani asked the masterminds and the states sponsoring the terrorist operations in Iraq and Syria to stop killing their Muslim brothers, warning that the terrorists would one day attack their supporters.

“We stress and advise all Muslim states and all those who unfortunately help the terrorists with their money and petro dollars to know that it will be their turn tomorrow, and they shouldn’t think that you have stimulated these savages merely against others,” Rouhani said.

He called on the sponsors of terrorist groups to stop their supports, and said, “Desist from violence; there is no confrontation between the Shiites and the Sunnis and they are brothers and have been living in Iraq, the Levant and Iran and everywhere beside each other.”

Rouhani underlined that any discord and conflict between Muslims merely gladdens the Zionists and the criminal powers, adding that the Islamic world needs unity more than any ever.

Iranian Commander Warns against Optimism towards US after N. Deal 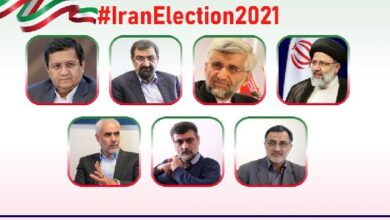