The two top diplomats made the remarks during a joint press conference in the Iranian capital, Tehran, on Sunday, hours after the reopening of the UK Embassy in the Islamic Republic and Iranian Embassy in London.

Zarif said Iran and Britain could resolve “differences through interaction and reaching a mutual understanding.”

He said the reopening of the embassies could be a restart of Iran-Britain relations, adding, “Today, we entered the phase of mutual relationship based on mutual respect.”
“We are ready to resolve problems through dialogue on issues we have differences, like human rights,” he said.

The Iranian foreign minister noted that Tehran and London share views about fighting “extremism, Daesh” and drug trafficking in the region.

Answering a question on the Islamic Republic’s relations with its neighbors, the Iranian foreign minister said, “Iran will engage with all its neighbors,” adding that “exclusion” is not “our policy.”

“If we try to gain at the expense of others, all of us will lose,” Zarif said, adding, “We call upon our neighbors to respond positively to this approach.”

For his part, Hammond said he felt “delighted” about the reopening of Iranian and British embassies, saying they serve as “important practical channels” to engage on “many issues we have shared interests.”

Reopening our embassies is “a first step” toward reestablishing the links between the British people and Iranian people, Hammond said.

He said that there has been a “step-by-step” improvement in relations between the two countries since President Hassan Rouhani was elected in July 2013.

“Iran is and will remain a very important country in a strategically but volatile region,” he said.
Hammond noted that “our embassies play an important role in maintaining” dialogue between Tehran and London.

The British foreign secretary said he is looking forward to a sustained dialogue and mutually beneficially cooperation between the UK and Iran.

The top British diplomat also referred to his talks with Iran’s petroleum minister, Bijan Zangeneh, saying the business delegates accompanying him are “more than willing” to invest in Iran once sanctions against the Islamic Republic are lifted.

Hammond referred to Iran’s nuclear agreement with six world powers as a “major step” which would help the two countries “rebuild economic relationships.”

He expressed assurances that “trust will be rebuilt” through the implementation of the Joint Comprehensive Plan of Action (JCPOA), the nuclear agreement struck between Iran and the five permanent members of the UN Security Council plus Germany on July 14.

Hammond arrived in Tehran on a historic visit earlier on Sunday, and went to the embassy’s premises to reopen the headquarters of the British diplomatic mission to Iran, which had been closed since November 2011.

Back then, Britain closed the embassy and withdrew its diplomatic staff after hundreds of Iranian students staged a protest outside the diplomatic premises in Tehran against the expansion of UK sanctions on Iran, pulling down the UK flag and demanding the expulsion of the British ambassador.

Iran’s Parliament (Majlis) had earlier approved a bill to downgrade the diplomatic ties between Tehran and London to the level of chargé d’affaires.

The resumed diplomatic relations between the two countries will now continue at the level of chargé d’affaires until the appointment of ambassadors, which is expected in the coming months.

Also on Sunday, Iranian Embassy in London was also reopened in the presence of Iran’s Deputy Foreign Minister Mehdi Danesh-Yazdi and Iran’s chargé d’affaires to the UK, Mohammad Hassan Habibollahzadeh. 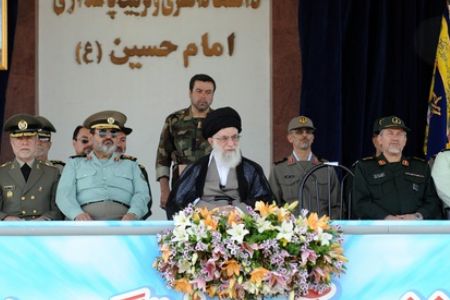 ‘Islamic Revolution brought US to knees