Manama’s security forces have arrested Mohammad Khatam for a second time in less then two months.

The Bahraini father of four wrote in a Twitter post on Monday that he had been detained after returning to the streets to protest his wrongful termination by one of the kingdom’s ministries.

Prior to his arrest, Khatam shared a series of videos on his Twitter page appearing in front of a number of government buildings in Manama and holding up a handwritten sign addressed to the Bahraini monarch that read ‘I can not support myself and my family’.

Formally an employee at Bahrain’s Ministry of Municipalities Affairs and Urban Planning, Khatam alleges that he was wrongfully terminated due to discriminatory practices against the kingdom’s Shiite majority. 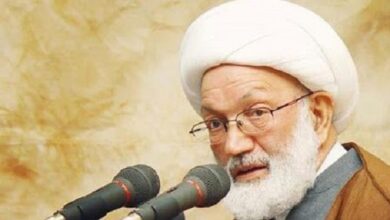 Ayatollah Isa Qassim: Muslims must not remain silent on Macron’s insult to Islam