An informed source has warned about inhumane conditions at Bahrain’s notorious Jau Prison, saying more than a dozen prisoners have been brutally beaten and subjected to various forms of physical torture in the detention center, as the Al Khalifah regime continues to terrorize them one way or another.

Lebanon’s Arabic-language television network, citing the unnamed source, reported that officials at the prison, located south of the capital Manama, have viciously beaten up 14 inmates, some of whom have suffered some kind of head injury.

The source expressed hope that the case would go to legal institutions inside and outside of Bahrain, and that prisoners would endure less torments at detention centers across the Persian Gulf kingdom.

Last September, an independent human rights organization raised the alarm over ‘inhumane conditions’ at Bahrain’s Jau Prison, saying prisoners were exposed to various forms of physical and mental torture at the jail.

The Bahrain Center for Human Rights (BCHR) said officials at the prison had ramped up their repressive measures and harassment of imprisoned political dissidents, including human rights advocate Abdulhadi al-Khawaja.

Khawaja, the former president and co-founder of the BCHR, was arrested and put on trial on April 9, 2011, as part of a campaign of repression by Bahraini authorities following pro-democracy protests in the Persian Gulf kingdom.

He was sentenced on June 22 that year, along with eight other activists, to life imprisonment.

The Bahrain Center for Human Rights further noted that prisoners of conscience at Jau Prison were put on unfair trials, and handed down lengthy jail terms simply on charges of defending their rights and criticizing the policies of the ruling Al Khalifah regime.

It went on to say that prison authorities had lately summoned a number of guards, who used to torture detained activists in the past, to perform their duties in prison cells.

Demonstrations have been held in Bahrain on a regular basis since a popular uprising began in the Arab country in mid-February 2011. 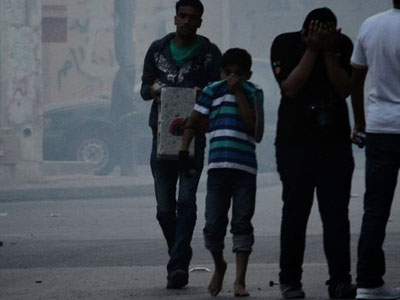 Bahrain sentences 30 for up to 15 years over different charges