The Iraqis are no longer talking alone about a Gulf-Turkish financing of terrorism. After the events of Mosul and the subsequent security developments in Iraq, terrorism, has identified itself, just as its financers did.

The events of Mosul were led by the groups of the so-called the “Islamic State in Iraq and the Levant” (ISIL) organization, allying with elites and high-ranking officers belonging to the Baathist – Iraqi man Izzat al-Douri; the second man in the era of Saddam Hussein, who is wanted in Iraq for his involvement in committing genocide in the era of decadence.

What is being propagated by some people regarding that the looting practices by the armed terrorist groups are only what funded their activities seems to be not convincing. The (ISIL) organization, which looted 429 million dollars from the Central Bank in Mosul (an equivalent of half a billion dollars) to become the richest terrorist organization surpassing al-Qaeda itself, is known for its multiple sources of funding. Its groups that consist predominantly of foreign fighters are infiltrated by several intelligence services, and the same goes for Izzat al-Douri’s militants, who are under the command of the so-called the “Men of the Naqshbandi Order”*. The man, who is chased in Iraq, was able to form an armed organization that has a doctrinal basis, too. “BBC” supposed probably that al-Douri played a key role in financing the “Sunni insurgents in an attempt to undermine the Iraqi government”. The sources of funding al-Douri’s militants have never been mentioned in media before, but the movements and positions of the Baathist official are enough to imply that.

In an explicit position, the Iraqi government – in a statement – considered that Saudi Arabia is responsible for supporting the terrorist groups financially and morally, “including the resulting crimes that amount to genocide”, arguing that the position of Riyadh on Iraq “is not only an interference in the internal affairs, but rather indicates a type of appeasement of terrorism”.

In fact, this was consistent with the accusations by the Iraqi Prime Minister Nuri al-Maliki, in previous positions, when he accused Saudi Arabia and Qatar of “declaring war on Iraq”, held them responsible for the security crisis in this country, and considered that they have political and sectarian backgrounds”. According to him, they both recruit the fighters and radical groups to send them to Iraq.

In an interview with Al-Manar TV, the MP for the State of Law Coalition, Zainab Waheed Salman, said that the destructive role played by Saudi Arabia in Syria is being repeated in Iraq. The Iraqi media, quoting from the security committee in the province, reported that a Saudi officer was killed at the hands of the Peninsula Shield forces on the Iraqi territory a few days ago, and that other Saudis were arrested in the southern province of Dhi Qar, and this demonstrates the involvement of the Kingdom.

Most of the fighters who have been arrested are Saudis or have pointed during investigations being conducted with them that the Kingdom facilitated their crossing into Iraq. The Iraqi parliament’s MP was not the only one who said this, but the Political activist Fuad Ibrahim mentioned in the Lebanese “Al-Akhbar Newspaper” videos on “YouTube” showing Saudi fighters in Iraq being disclosed by their “Saudi Najdi Arabic and Jenubi Arabic (southern) dialects”. He added: “Narratives about the presence of Saudi fighters in Mosul, Salahuddin, Diyala, and others are overflowing the social networking websites. Yet, the coming days will unfold the number and the roles of the Saudis in the organizational and military structure of the (ISIL)”.

MP Salman, after giving information, wondered what Saudi Arabia would want in Iraq. “Does it want to control the entire region at the expense of the peoples of the region? Saudi Arabia never felt satisfied with its interference in the affairs of Bahrain and Syrian, so that is why it is today leading a fierce war using the terrorist groups against the political process and the democratic project in Iraq”.

In late 2012, one of the leaders of the State of Law Coalition, Sami al-Askari, revealed that al-Douri left to Saudi Arabia through the airport in Irbil, criticizing that the airport is not subject to the central authority.

Few months before the Iraqi elections, in an interview with “al-Ahram Al-Arabi” magazine, Izzat al-Douri’s positions were identical in full with the statements of the officials of the Kingdom.

“Saudi Arabia represents the base of steadfastness and of repelling all the conspiracies and attempts targeting the nation’s identity and presence. The Safavid Iran would have dominated the Gulf absolutely and would have striven to make mischief in this vital region of our country and our nation, if the Kingdom of Saudi Arabia had not been on the alert”.

Al-Douri said: “Long live the Kingdom, and long live its respectable role and its thoroughbred Arabian faithful positions on the revolution of the Syrian people, on Bahrain, and on the Gulf in general, as well as on the people of Iraq and their revolution, on the people of Egypt and their army and revolution, on Yemen, Palestine, Lebanon, Somalia, and on any country where there is a real threat to the nation and its core interests”.

Flirting with the Saudi affection, the wanted man attacked the Islamic Republic of Iran, describing what is happening in Iraq as a “valiant resistance” to the project of the “hegemony of Iran”. Al-Douri did not mention the terrorist groups in Iraq, but spoke about the “rebels”, and these terminologies are used by the Saudi media.

Asking al-Douri whether he expects any change in the Iraqi situation after the elections, he stressed that the situation “will get worse”. He offered the people of Iraq one single advice “to be unified, to embrace their valiant resistance, and to hold their national, nationalist, and Islamic forces so as to sweep this political process”.

These words explain the mechanism of implementing what the head of the Saudi intelligence Turki al-Faisal has previously promised during the Plenary Session of the Security Conference, which was organized by the Bahrain Center for Strategic, International and Energy Studies on April 22 this year, when he warned: “If Nouri al-Maliki, the current Prime Minister who finished his term, won the elections, which are being prepared in the current period, Iraq will be divided”.

“The Battle for Iraq is a Saudi War on Iran”, under this title the director of the Gulf and Energy Policy Program at the Washington Institute for Near East Policy, Simon Henderson, tried to interpret the events witnessed in the Iraqi arena. He wrote about the King of Saudi Arabia Abdullah bin Abdul Aziz: “He has no doubt realized that- with his policy of delivering a strategic setback to Iran by orchestrating the overthrow of al-Assad in Damascus showing little sign of any imminent success- events in Iraq offer a new opportunity”.
Henderson added that what happened in Iraq “represents the dream of Saudi’s monarch King Abdullah for years”. He assumed that the activity of the terrorist organization “ISIL”, which he described as “a killing machine that shows no mercy”, is considered in Iraq “a response to al-Maliki’s support for al-Assad”.
He pointed out that there is a substantial dimension in the Saudi policy represented by its “willingness to support radical Sunnis abroad while containing their activities at home”. He continued: “Hence, Riyadh’s arms-length support for Osama bin Laden when he was leading jihadists in Soviet-controlled Afghanistan, and tolerance for jihadists in Chechnya, Bosnia and Syria”.

In Syria, according to Henderson, “Saudi intelligence reopened its playbook and started supporting the Sunni opposition, particularly its more radical elements”. Despite the resignation of the head of its intelligence Bandar bin Sultan, “the Saudi support for jihadi fighters appears to be continuing”.

Henderson explains the Kingdom’s support for the terrorist groups and its fear of the extension of these groups as witnessed in the twenties of the last century. “The religious fanatic (Ikhwan) fighters were helping Ibn Saud to conquer the Arabian Peninsula and were also threatening the British protectorates of Iraq and Transjordan. Ibn Saud, the father of the current Saudi King, gave carte blanche to the British to massacre the (Ikhwan) with machine-gun equipped biplanes, personally leading his own forces to finish the job, when the (Ikhwan) threatened him at the battle of “Sabilla” in 1929”.
*The Naqshbandi Order: is the largest Sufi order and is spread in Turkey, Syria, Palestine, Kurdistan, and the rest of the countries of northern Iraq. Although Sufism focused on the spiritual relationship, but the “Men of the Naqshbandi Order” were differentiated in Mosul after the fall of Saddam Hussein and after Izzat al-Douri resorted to logic, so they carried the weapon and later adopted many of the armed operations.

Imam al-Ridha s Words on the Sign of the Imam 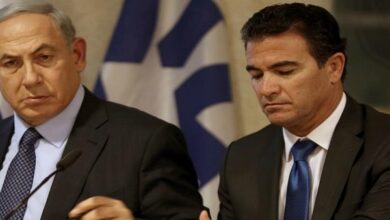