“Israel” announced war on “stone throwers.” The announcement that was made by Prime Minister Benyamin Netanyahu included “modifying the rules of engagement, imposing sanctions on the stone throwers since “the stone kills”, and wishing to consider the person who is detained for throwing stones as the one who carries a killing weapon,” according to the Israeli Minister of Justice Ayelet Shaked’s statement to the Israeli Army Radio. This announcement carries a sort of implied fear and awareness by the Israelis that the only thing that would hinder their plans of dividing the al-Aqsa mosque regarding time and place, under the Arab, regional and international hibernation, is the stones of Palestine.

According to the Expert in Israeli Affairs Ali Haidar, the enemy’s government, its Prime Minister and ministers found an opportunity to start serious and quick steps to divide al-Aqsa mosque under such a troubled regional situation. This goes under the reality of the Arab countries most of which are witnessing continuous bloody conflicts, where Takfirism and terrorism compose main elements. It is also worth to mention the Arab Gulf aggression against the Arab Yemen as well, besides the “international reactions to the Israeli actions of Judaization and settlement, that don’t represent other than condemnations and expressing concerns. In other words, they are just figurative reactions.

Mr. Haidar, over a phone call with al-Manar website, explained that this continuous aggression against al-Aqsa and the Makdessis stationed in it, as well as destroying the gates of the southern mosque, an unprecedented action by the enemy, in addition to the Likud’s calling its supporters via media websites and social media networks for wide participation in breaking into al-Aqsa, all such actions form a stage that would be entitled as “fire reconnaissance.” This means, according to Haidar, that the Israeli leadership is currently conducting a “checking operation,” and if it happened that there isn’t any deterrent, “it will move forward in its steps to reach applying the division,” to reach the bigger goal, which is according to Palestinian researcher Taysir al-Khatib, “to control al-Aqsa through a plan based on destroying parts of the mosque and building new establishments over these parts.”

Would anything remove this threat on al-Aqsa? Mr. Haidar sees that “the West Bank in particular has a great influence on the security and political awareness of the Israeli leadership.” Similar to what happened on September 28, 2000 when Prime Minister Ariel Sharon entered the courtyard of the al-Aqsa mosque, an uprising took place. “In case they moved effectively, the enemy would be deterred and will delay its goals,” according to Haidar.

The Palestinian researcher, Mr. Taysir al-Khatib tells our website that “since the very first moments of the Israeli army’s breaking through the courtyards of the al-Aqsa mosque in 1967, the Israeli military spokesman at the time announced that “we returned to the Temple Mount, meaning the Aqsa mosque according to the Israeli designation.” The man adds that “the Israelis at the time set the al-Aqsa mosque atop of their goals, but their steps toward achieving this goal went back and forth with respect to the circumstances.”

The current circumstances, which the enemy considered they are in its favor more than any time, perhaps are the same circumstance putting al-Aqsa, the direction for Muslims to worship, in the most dangerous stage over the history of the Arab Israeli conflict. They are also the same circumstances that would be hit by an angry stone thrown from the West Bank, in which they would change in favor of that hand, the one that threw this stone.

Hezbollah in Syria: 15 Months of Security and Military Achievements – 1/3 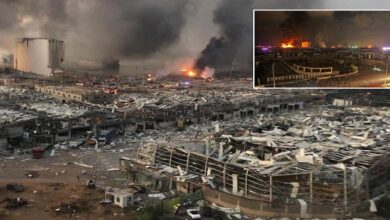 Who benefiting from blast in Beirut?

The Splendor of the prophet of Islam (Part 3)