At least four people, three of whom were Chinese nationals, were killed in a suicide attack inside the premises of Karachi University (KU) on Tuesday.

CTD chief in Karachi, Raja Umar Khattab confirmed that the Karachi University blast was a suicide attack. It killed four people including two Chinese women and a man and also injured four, he said while speaking to the media. Khattab said the attack was carried out after surveillance.

The attacker was a female MPhil student, who said goodbyes to her friends on Twitter at 12:10pm.

The bombing targetted a white Hiace van near the gate of the Confucius Institute inside the varsity premises. The Chinese nationals were part of the institute’s faculty.

According to a report by the bomb disposal squad, three to four kilos of explosives were used in the attack.

“We are investigating the incident by collecting evidence, but it seems that the Chinese teachers were the actual target of the explosion,” the city police chief said.

However, DIG East Muqadas Hyder was more guarded in his statement and said the police has obtained the CCTV footage of the blast and were investigating. “It is premature to say whether or not it was a suicide attack. We also have to confirm if the burqa-clad woman was a passerby or the bomber.”

The KU vice-chancellor also confirmed that Chinese faculty members were among the deceased. The Pakistan driver was also killed in the blast.

Footage showed a white Hiace van completely burnt after the explosion, with one side of the vehicle peppered with small holes. The proscribed Baloch Liberation Army (BLA) claimed responsibility for the attack.

Soon after the incident, a large contingent of law enforcers along with rescue personnel reached the site of the incident.

The university administration has announced that all classes in the university will remain suspended on Wednesday, April 27.

After the explosion, Sindh Chief Minister Murad Ali Shah contacted the police chief. The IGP informed the CM that the blast took place inside a van near the Commerce Department of the university.

The chief minister also ordered the Karachi commissioner to submit a report on the bombing.

Prime Minister Shehbaz Sharif also called the Sindh CM after the blast. Murad informed the prime minister regarding the details of the incident.

The chief minister informed the premier that at least four people, including Chinese nationals, were killed in the attack. Shehbaz assured that the federal government would extend help to the provincial government to prevent such attacks in the future.

Murad immediately reached the Chinese Consulate after the suspected terror incident and expressed deep sorrow and regret over the death of three Chinese nationals in the blast.

The provincial chief executive assured the consul general of a thorough probe of the incident and vowed that the culprits would be brought to justice.

“We value the services of Chinese experts in the country and the province,” CM Murad told the consul general. “Some elements do not like the Pakistan-China partnership. This kind of thinking and the characters involved will be dealt with iron hands.”

The consul general thanked CM Murad for coming to the Chinese Consulate immediately after the incident.

In a statement issued from Media Cell Bilawal House, the PPP chief expressed deep grief and sorrow over the loss of precious human lives in the attack. “I am sure Sindh Police will ferret out the terrorists and they will soon be in the clutches of law,” he added.

Bilawal stressed that fool-proof measures should be taken to ensure security of the Chinese citizens in Pakistan. He also prayed for early recovery of those injured in the attack.

Security concerns prior to the attack

Security advisor of Karachi University (KU) Dr Muhammad Zubair wrote a letter to the Director of the Confucius Institute requesting the institute confine the movements of Chinese faculty, and ensure that foreign nationals are provided security.

In a letter dated March 31, Dr Zubair noted that Chinses faculty at KU often leave Foreign Faculty Offices to go outside the campus without a security detail, adding that “in case of any mishaps, KU Security will not be responsible.”

The security advisor insisted that the foreign faculty do not leave campus without the assistance of police and Rangers.

In response to his letter, the Director of the Confucius Institute noted that the varsity has a separate office of Campus and Security affairs to “look after all matters related to the security of the students, faculty and the university property with the assistance of the Rangers and local police.”

The director furthered that it is “important to realise that rather than shifting responsibility to another,” standard operation procedures (SOP) should be devised for the “smooth and secure movement of Chinese faculty.”

He added that the security advisor’s department establish a liaison with law enforcement authorities for the protection of foreign nationals.

Islamabad is Beijing’s closest regional ally, with China pouring billions of dollars into Pakistan in recent years to boost the nation’s infrastructure. 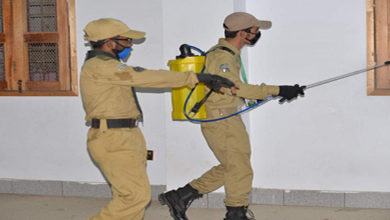